WHAT MAKES YOU DIE, suspense/horror set on Long Island (again!) 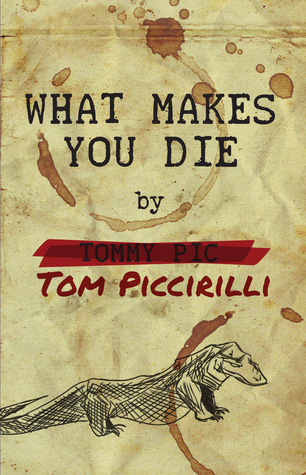 The Publisher Says: To see more is to find oblivion…

Tommy Pic’s hallucinations come and go and leave sticky notes for him during his bipolar swings. Coming out of a blackout in an unfamiliar psychiatric ward, Tommy Pic awakes to his missing childhood love, his dead brother, his alive family, and a message from his agent that his latest screenplay may yet be his ticket back to Hollywood fame and fortune. If only he could remember writing it.

Searching out the hallucinations that will write Acts 2 and 3 of the screenplay that will oust Zypho as his best-known work, Tommy goes chasing his kidnapped childhood love, a witch from the magic shop, the komodo dragon he tried to cut out of his gut on Christmas Eve.

… This is what makes you die.

My Review: This book is bittersweet because its author died of a brain tumor last July. His career output was good-quality suspense and horror fiction, and a brief note from his widow posted on Facebook suggests that there could be posthumous goodies.

Let no one speak ill of the dead, runs the Roman maxim, and I have no ill to speak. I enjoyed this read, found it compelling, finished it in a day or so. The problems that knocked a whole star-and-a-half off my rating were all about the cohesion of the events in the book. A man having blackouts and talking to dead people is bound to have a continuity issue or two in his brain. On paper, these come across more as scattershot than as planned and placed pieces of the one story: Tommy Pic's life.

It's a good book, give it a try, just don't expect too much formal structure and all will be well.
Posted by Richard at 6:30 AM