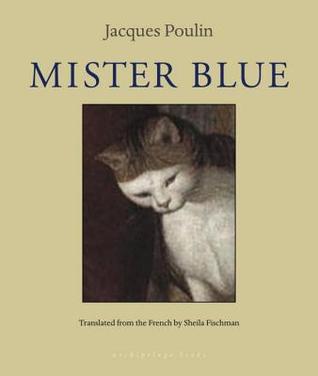 The Publisher Says: By the Governor General Award and Quebec-Paris Prize-winning writer, a novel about a struggling writer and Mister Blue, his cat and sole companion until the day they discover a copy of The Arabian Nights in a cave along the beach. Tinged with melancholy, Mister Blue is at once playful, understated, and deeply human.

My Review: This book arrived in a surprise package from my sister, and we must be sharing some aetheric connection: Two days before I got the package, I was dithering between this Poulin title and Translation is a Love Affair to put in my Amazon cart for Money Day! Heh. Now I can read both!


'Books contain nothing, or almost nothing, that's important: everything is in the mind of the person reading them.'

If you were trying to find an idiotic remark, that one took the cake!

Thus speaks Jim, addressing an intimate audience, and self-talking his own, self-defined failure as a writer. You see, his (probably) imaginary love object won't show him her face, only leaving traces of herself in a riverside cave and a moored sailboat that slowly, steadily is repaired and painted and generally tarted up in the course of Jim's summer obsession.

By the end of the story, Jim's first novel-writing project has been abandoned, a love story that contains no lovers only friends. His second project, just begun as we leave the ramshackle house of Jim's youngest years, gains wind in its sails by his first, possibly first ever, emotional risk-taking act. It's not exactly a stunning shocking pearl-clutching shock, but it is amazing nonetheless. It is a pitch-perfect end to a beautiful chamber opera. I can't wait for the next one to arrive!