THE BOOK OF LIFE, a strange and wonderful discovery 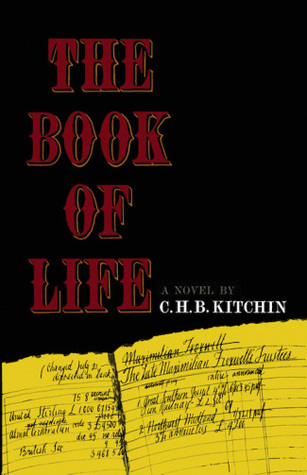 The Publisher Says: Set in the twilight of the Edwardian era, this is the story of Francis Froxwell, a young orphan fascinated by his grandfather's 'Book of Life', a ledger that lists the immense wealth he and his relatives will inherit when the old man dies. Unhappy at boarding school and treated coldly by his relations, Francis finds solace in the thought of his future fortune and a possible baronetcy. Francis's only friends are his uncle Demetrius, whose affair with a divorcée has made him the black sheep of the family, and Jimmy Waring, a disgraced ex-schoolmaster and the brother of Demetrius's mistress. As Francis finds himself unwittingly caught up in the intrigues of these two men, a chain of events is set in motion leading to sex, scandal, blackmail, and death . . . and the elimination of at least one name from the 'Book of Life'.

An unjustly neglected novelist, C.H.B. Kitchin (1895-1967) was best known for his early mystery novels and was frustrated later in life when he continued to turn out minor masterpieces like Ten Pollitt Place (1957) and The Book of Life (1960), which won critical acclaim but were largely overlooked by the book-buying public. This edition features an introduction by Francis King.


My Review: There is a little teensy warm spot in whatever it is that passes for my heart saved just for old-fashioned, mannered stories and prose. This book sat directly on the spot, and almost extinguished the warmth.

The story of an orphan with Great Expectations isn't new or fresh, but the spin Kitchin (almost) puts on it...coming of age as gay in the Edwardian Era...was tenuous at best, and sank with barely a bubble in the narrative flow. So, in the end, it's Great Expectations Disappointed and some highly noxious people benefit from the main character's fall from grandparental favor.

But there is still a lovely lilt to Kitchin's words. The characters, for all the unpleasantness of their personalities, are sharply and wittily limned in vitriol and rosewater. In some moods, that's enough. For me, this wasn't one of those moods. Too bad.
Posted by Richard at 6:30 AM