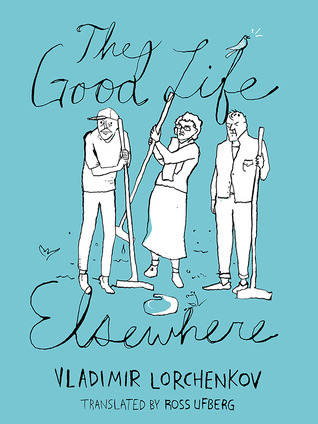 The Publisher Says: The Good Life Elsewhere is a very funny book. It is also a very sad one. Moldovan writer Vladimir Lorchenkov tells the story of a group of villagers and their tragicomic efforts, against all odds and at any cost, to emigrate from Europe’s most impoverished nation to Italy for work. The Good Life Elsewhere aims to present the complexity of a new Europe, where allegiances shift but memories are rooted in place. The book integrates small-scale human follies with strategic partnerships, unification plans, and the Soviet legacies that still hang over the former Eastern Bloc. Lorchenkov addresses the vexing question of what to do when many formerly pro-Soviet/pro-Russia countries want to link arms with their Western European brethren. In this uproarious tale, an Orthodox priest is deserted by his wife for an art-dealing atheist; a mechanic redesigns his tractor for travel by air and sea; thousands of villagers take to the road on a modern-day religious crusade to make it to the promised land of Italy; meanwhile, politicians remain politicians.

Like many great satirists from Voltaire to Gogol to Vonnegut, Lorchenkov makes use of the grotesque to both horrify us and help us laugh. It is not often that stories from forgotten countries such as Moldova reach us in the English-speaking world. A country where 25 percent of its population works abroad, where remittances make up nearly 40 percent of the GDP, where alcohol consumption per capita is the highest in the world, and which has the lowest per capita income in all of Europe – this is a country that surely has its problems. But, as Lorchenkov vividly shows, it’s a country whose residents don’t easily give up.

Russian critics have praised Lorchenkov’s work, calling this novel “a bleeding, wild work, grotesque in every twist of its plot and in every character, written brightly, bitterly, humorously, and – paradoxically, as we’re dealing with the grotesque – honestly.” In The Good Life Elsewhere, Vladimir Lorchenkov shows himself to be a fearless critic, an enduring optimist, and a master stylist. And he does it all “in vivid colors, with a pamphleteer’s spite, and a good-humored smile.”

My Review: When I was a tot, I loved the Warner Brothers-Merrie Melodies cartoons. My mother, vigilant on the subject of what and how much TV I could watch, wrinkled her nose and pursed her lips like last night's prune whip was disagreeing with her, but ultimately gave in.

As everyone my age knows already, it was the Roadrunner, and how I loved those gravity-defying falls Wile E. Coyote took, the razzberry the Roadrunner invariably blew at him, and of course MEEP MEEP!!

The entire book, I felt like the Moldovan people one and all were the collective reincarnation of Wile E. Coyote. "All the poor bastard ever wanted was some lunch," was my father's summation of the cartoons. Yeah, I thought every time another hare-brained scheme to get to Italy failed, all the poor bastards want is some food!

And somehow, through some collective karmic deficiency, not one success story leavens this heavy dough. But the icing of absurdity and dreamy impracticality kept me smiling and turning pages.

I wanted to send the poor guys contact information for the Acme Corporation, but couldn't figure out how.
Posted by Richard at 6:30 AM