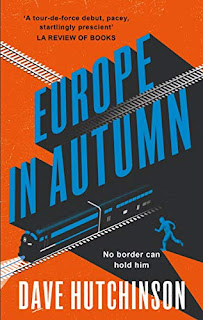 JUNE 2021 NEWS The Fractured Europe Sequence will be on your TV before too terribly long! I'm so delighted for Dave and grateful for the Peak-TV age.

The Publisher Says: Europe in Autumn is a thriller of espionage and the future which reads like the love child of John le Carre and Franz Kafka.

Rudi is a cook in a Krakow restaurant, but when his boss asks Rudi to help a cousin escape from the country he's trapped in, a new career - part spy, part people-smuggler - begins.

Following multiple economic crises and a devastating flu pandemic, Europe has fractured into countless tiny nations, duchies, polities and republics. Recruited by the shadowy organisation Les Coureurs des Bois, Rudi is schooled in espionage, but when a training mission to The Line, a sovereign nation consisting of a trans-Europe railway line, goes wrong, he is arrested, beaten and Coureur Central must attempt a rescue.

With so many nations to work in, and identities to assume, Rudi is kept busy travelling across Europe. But when he is sent to smuggle someone out of Berlin and finds a severed head inside a locker instead, a conspiracy begins to wind itself around him.

With kidnapping, double-crosses and a map that constantly re-draws, Rudi begins to realise that underneath his daily round of plot and counter plot, behind the conflicting territories, another entirely different reality might be pulling the strings...

THE FRACTURED EUROPE SEQUENCE REVIEWS:
EUROPE AT MIDNIGHT—EUROPE IN WINTER—EUROPE AT DAWN

My Review: If book 2 is out, I'm orderin' it for myself for Xmas.

This isn't a uniformly kinetic book. The characters, by whatever names their current legends require, (oh, and "legend" here is a term of art) are shown thinking, strategizing, reflecting on their world and its insanities as much as they're shown whizzing around with cool spy stuff and lots of ways to blow people up and steal their money.

My favorite piece of spyware in the book is a towel that rolls out into a computer. WANT. NOW.

Rudi, by various names, does many reprehensible things and feels...remorse is too strong...as if he's failed when he has to resort to reprehensibility to get what he's been sent after. He meets and re-meets many folks from his pasts. He is a darn good, fun hero-on-the-border-of-antihero-ness, and I want to see him in book 2, Europe at Midnight.

And now I'm going to do something really, really mean: At the end of the book, Rudi makes a complete worldview-changing discovery that is, at least for me, unexpected to the point of jaw-dropping, and I am NOT going to spoiler it. It makes some oddly rough, even poorly fitting, facts make absolute sense. Moments when I looked at a sentence and thought, "...the hell...?" weren't frequent, but there were more than enough of them for me to perk my ears. (Of course I was evilly hoping I'd get to say something condescending and unpleasant, and alas could not.)

I really, really liked this book. I hope there's no let-down coming!

And lest there be any doubt, I'm acquainted with Mr. Hutchinson through social media, but I bought the book with my own United States dollars. Neither the six-toed McHutchface nor Solaris Books think I'm cool enough to pass me freebies.
Posted by Richard at 6:30 AM