THE HEART OF A DOG: Even before THE MASTER & MARGARITA, Bulgakov's imagination was unstoppable 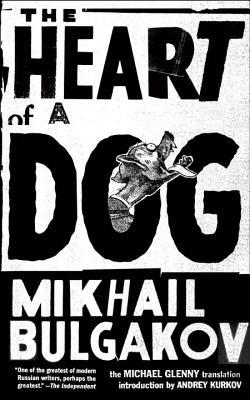 The Publisher Says: A new edition of Bulgakov’s fantastical precursor to The Master and Margarita, part of Melville House’s reissue of the Bulgakov backlist in Michael Glenny’s celebrated translations.

A key work of early modernism, this is the superbly comic story of a Soviet scientist and a scroungy Moscow mongrel named Sharik. Attempting a medical first, the scientist transplants the glands of a petty criminal into the dog and, with that, turns a distinctly worryingly human animal loose on the city. The new, lecherous, vulgar, Engels-spouting Sharik soon finds his niche in governmental bureaucracy as the official in charge of purging the city of cats.

A Frankenstein fable that’s as funny as it is terrifying, The Heart of a Dog has also been read as a fierce parable of the Russian Revolution. It was rejected for publication by the censors in 1925, and circulated in samizdat for years until Michael Glenny translated it into English in 1968—long before it was allowed to be officially published in the Soviet Union. That happened only in 1987, although till this day the book remains one of Mikhail Bulgakov’s most controversial novels in his native country.

My Review: Anyone who's ever read The Master and Margarita already knows that Bulgakov is a rebel, an anarchist, and damn good and funny with it. His thoughts were, based on the novels I've read, contrarian in the extreme as well as profoundly sensitive to practical concerns:


“The rule apparently is – once a social revolution takes place there’s no need to stoke the boiler. But I ask you: why, when this whole business started, should everybody suddenly start clumping up and down the marble staircase in dirty galoshes and felt boots? Why must we now keep our galoshes under lock and key? And put a soldier on guard over them to prevent them from being stolen? Why has the carpet been removed from the front staircase? Did Marx forbid people to keep their staircases carpeted? Did Karl Marx say anywhere that the front door of No. 2 Kalabukhov House in Prechistenka Street must be boarded up so that people have to go round and come in by the back door? What good does it do anybody? Why can’t the proletarians leave their galoshes downstairs instead of dirtying the staircase?’
‘But the proletarians don’t have any galoshes, Philip Philipovich,’ stammered the doctor.”

And the simple truth about revolution that probably contributed heavily to the book's suppression in the Soviet era:


“People who think you can use terror are quite wrong. No, no, terror is useless, whatever its colour – white, red or even brown! Terror completely paralyses the nervous system.”

He saw the terror around him, saw the results, and distilled a response into a short phrase. That's writing that's a joy to read.

But we can't leave revolutionary-era Moscow without hearing from the eponymous heart-haver. Early in the book, we're told the sad tale of an unwanted dog whose people-savvy beats that of most of the humans I've ever met:


Eyes mean a lot. Like a barometer. They tell you everything-they tell you who has a heart of stone, who would poke the toe of his boot in your ribs as soon as look at you-and who’s afraid of you. The cowards – they’re the ones whose ankles I like to snap at. If they’re scared, I go for them. Serve them right..grrr..bow-wow…”

All hail Michael Glenny, of blessed memory since dying in 1990. Without him, Bulgakov's banned and suppressed works might remain out of the English-speaker's reach.
Posted by Richard at 11:57 AM