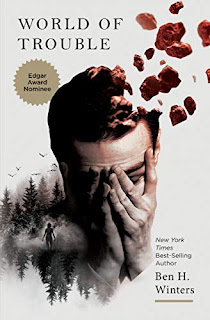 The Publisher Says: There are just 14 days until a deadly asteroid hits the planet, and America has fallen into chaos. Citizens have barricaded themselves inside basements, emergency shelters, and big-box retail stores. Cash is worthless; bottled water is valuable beyond measure. All over the world, everyone is bracing for the end.

But Detective Hank Palace still has one last case to solve. His beloved sister Nico was last seen in the company of suspicious radicals, armed with heavy artillery and a plan to save humanity. Hank's search for Nico takes him from Massachusetts to Ohio, from abandoned zoos and fast food restaurants to a deserted police station where he uncovers evidence of a brutal crime. With time running out, Hank follows the clues to a series of earth-shattering revelations.

The third novel in the Last Policeman trilogy, World of Trouble presents one final pre-apocalyptic mystery – and Hank Palace confronts questions way beyond whodunit: How far would you go to protect a loved one? And how would you choose to spend your last days on Earth?

My Review: If there is one series I can *COUNT*ON* not to have extra volumes, it's this one. I can't imagine I'm spoilering this for anyone. The world ends the same time the book does.

Leading up to that finale to end all finales is our buddy Hank doin' his Hankly duty: Looking for his sister Nico and finding the odds and sods of wherever he is in his way. Of course, he has erstwhile baddie Cortez and poor, sick Houdini the dog in tow. Each presents Hank with different kinds of drags on his none-too-swift progress. Each has some claim on him. All the way through these three novels, Hank Palace has been on the Hero's Journey, with all the trappings. It's more stark in this concluding (!) volume.

But there's a reason humans have kept this storyline around so long: It's riveting. Even with the literal end of the world looming, it matters, matters, that Hank finds his sister. We want him to succeed in his quest! What possible meaning can a quest have to people who will be discrete atoms in a matter of weeks, days, finally hours.

Put something in a pressure cooker and, when the lid's open, it's very obvious what it's made of. It's the same with people. Hank? He's made of stern, strong stuff. He's taken on the pain and the fear of each person he's met and he's done his level best to rid them of it; even when he can't he's changed the others to better fit around their pain.

In his own last hours, suffering mightily the curse of the strong to bear more burdens than their own, Hank seeks out the last human he knows whose strength matches his own. As Life ends, Hank holds the hand of a girl whose burdens are as his own, and they know that moment of glad sharing we all seek after for all our lives.
Posted by Richard at 6:30 AM