Ah, the French, the French...always a way to wile away an afternoon: THE COLORS OF INFAMY by ALBERT COSSERY 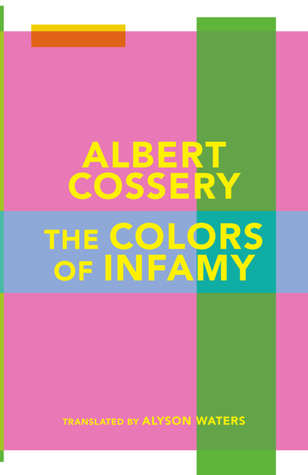 The Publisher Says: A delightful, deeply funny novel about the triumph of the perfect prankster — an elegant gentleman pickpocket in Cairo.

His eyes “shine with a glimmer of perpetual amusement”; his sartorial taste is impeccable; Ossama is “a thief, not a legitimated thief, such as a minister, banker, or real-estate developer; he is a modest thief.” He knows “that by dressing with the same elegance as the licensed robbers of the people, he could elude the mistrustful gaze of the police,” and so he glides lazily around the cafés of Cairo, seeking his prey. His country may be a disaster, but he’s a hedonist convinced that “nothing on this earth is tragic for an intelligent man.”

One fat victim (“everything about him oozed opulence and theft on a grand scale”) is relieved of his crocodile wallet. In it Ossama finds not just a gratifying amount of cash, but also a letter — a letter from the Ministry of Public Works, cutting off its ties to the fat man. A source of rich bribes heretofore, the fat man is now too hot to handle; he’s a fabulously wealthy real-estate developer, lately much in the news because one of his cheap buildings has just collapsed, killing 50 tenants. Ossama “by some divine decree has become the repository of a scandal” of epic proportions. And so he decides he must act. . . .

Among the books to be treasured by the utterly singular Albert Cossery, his last, hilarious novel, The Colors of Infamy, is a particular jewel.

My Review: Another weird little French novel, like the others I've reviewed over the years. Set in Cairo, written by an Egyptian-born French writer, this lovely work pokes ungentle fun at the well-documented foibles of the kleptocracy. Of particular interest to me was the revelation that honor was foisted on the poor by the rich in order to give them something that costs nothing, but will provoke them into spending hugely and warring indiscriminately.

Well! Blow me down and call me shorty! I've always suspected "honor" was some kinda con game.

As one would expect in a short French novel, the pleasures are more subtle and rely on the reader to winkle them out. Cossery wasn't one to revise and extend his remarks, as the politicos in Congress say; he believed laziness was a form of appreciative meditation, offering the lazy man the opportunity to see, really see, the beauties of the world and appreciate them appropriately. Material goods could never compete with the world's splendors. Time spent in offices, robbing the poor, was time never regained to be spent more productively and seductively in idleness.

Every character in this book has hold of a facet or two of this world-view. I think it should be spread far and wide, and made the height of fashionable aspiration.