THE CUSTODIAN OF MARVELS by Rod Duncan: Excellent. That's all, just excellent. 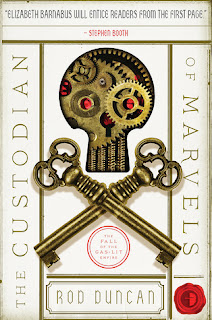 The Publisher Says: You’d have to be mad to steal from the feared International Patent Office. But that’s what Elizabeth Barnabus is about to try. A one-time enemy from the circus has persuaded her to attempt a heist that will be the ultimate conjuring trick.

Hidden in the vaults of the Patent Court in London lie secrets that could shake the very pillars of the Gas-Lit Empire. All that stands in Elizabeth’s way are the agents of the Patent Office, a Duke’s private army and the mysterious Custodian of Marvels.

Rod Duncan returns with the climactic volume of the Fall of the Gas-Lit Empire, the breathtaking alternate history series that began with the Philip K Dick Award-nominated The Bullet-Catcher’s Daughter.

My Review: If I did not already have information to the effect that this volume merely concludes the first series of books about the Gas-Lit Empire, I would even now be stowing away on a container ship bound for the UK with murder in my heart and author Duncan in my sights.

As things stand, I am thrilled by the ending of the book...by the entire last third, in fact...and the justice meted out therein. It's no secret from my earlier reviews that this is a series I've completely given myself over to. I have a suspicion that this is due to the talents of Mr. Duncan in applying his professional knowledge of science and computing to create a plausible explanation for this amazing world and its terrific characters. In previous reviews, I've described the point of departure for the series as unlikely in the extreme. I only now, at the very end of the third book in the trilogy, understand why this particular point of departure from the world we inhabit was chosen. In fact, it couldn't have worked in any other way. I will not spoiler this for anyone else, but keep the origins of the Gas-Lit Empire in your mind throughout the book and you'll be given an even richer reading experience than you'd have any other way.

I've got quibbles, of course, I'm a reader with thousands of books under my belt so it would be improbable for me not to have. I wonder how Miss Elizabeth Barnabus came to the final conclusion she did during the heist at the end of the book in such a hurry. But honestly, any quibble I have is more akin to brushing my husband's coat on his way out the door than to yanking at cards in a house of cards. Specks, mere specks, nothing more.

If it isn't crystal-clear from the foregoing, I am urging with great certainty and compulsion that you go forth on the instant and order whichever of these books you haven't yet read. If you haven't read any, buy the series in bulk. I waited an agonizing year before getting my copy of THE CUSTODIAN OF MARVELS, and I don't want others to suffer as I have done.
Posted by Richard at 1:58 PM