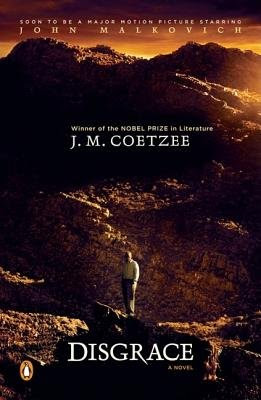 The Publisher Says: A divorced, middle-aged English professor finds himself increasingly unable to resist affairs with his female students. When discovered by the college authorities, he is expected to apologize and repent in an effort to save his job, but he refuses to become a scapegoat in what he see as as a show trial designed to reinforce a stringent political correctness.

He preempts the authorities and leaves his job, and the city, to spend time with his grown-up lesbian daughter on her remote farm. Things between them are strained - there is much from the past they need to reconcile - and the situation becomes critical when they are the victims of a brutal and horrifying attack.

In spectacularly powerful and lucid prose, J.M. Coetzee uses all his formidable skills to engage with a post-apartheid culture in unexpected and revealing ways. This examination into the sexual and politcal lawlines of modern South Africa as it tries desperately to start a fresh page in its history is chilling, uncompromising and unforgettable.

My Review: (One-line summary from Book Circle days) Wonderful writing, is there a story here?

I think I must have been in a foul humor when I wrote that. There is indeed a story here. And after seeing the 2009 movie, I decided to revive this review to get to that story.

About disgrace, about the taking of grace from another being, about the horrors of which grace, in its religious meaning, is capable of holding back.

David Lurie, fifty-two, isn't a bad man. He isn't a good man, either. He is a human male possessed of a libido and enough facility of mind and tongue to service that libido's demands. This means he is also capable of performing, to the absolute minimum standard, the demands of teaching the youth of Cape Town, South Africa, a subject barely worthy of attention: "Communication." Not, you will note, English, or a language, but the abstraction of communication, whole and entire.

I don't think Coetzee likes people too terribly much.

The ending is the final act of dis-grace. I strongly strongly urge dog-lovers not to read the ending. Put it this way: I'd love the ending had it featured a cat. Now, does that scare y'all off? Good.

But the writing. Oh me, oh my.


A rik to own anything: a car, a pair of shoes, a packet of cigarettes. Not enough to go around, not enough cars, shoes, cigarettes. Too many people, too few things. What there is must go into circulation, so that everyone can have a chance to be happy for a day. That is the theory; hold to the theory and to the comforts of theory. Not human evil, just a vast circulatory system, to whose workings pity and terror are irrelevant. That is how one must see life in this country: in its schematic aspect. Otherwise one could go mad.

Thus the musings of a father after a horrific crisis. David Lurie is dis-graced. Grace is no longer part of David Lurie's mental furniture, and while he fights it for over 100pp, in the end, at the ending, David Lurie accepts his fate:

He is disgraced.
Posted by Richard at 5:51 PM