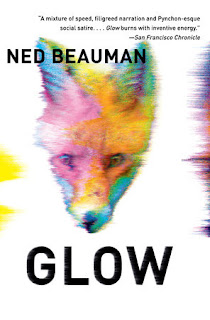 The Publisher Says: From one of England's most accomplished young writers: a taut, riveting, compulsively readable novel in which a young man (with a bizarre sleep disorder) uncovers the connections between foxes behaving oddly in London, Burmese people going missing, and glow, the newest recreational drug.

South London, May 2010: twenty-two-year-old Raf spends his days looking after Rose, a bull terrier who guards the transmitters for a pirate radio station, and his nights at raves in dingy warehouses and launderettes, where he first hears about the mysterious glow. When a good friend disappears without a trace, Raf's efforts to find him will lead gradually and then suddenly right into the thick of a massive corporate conspiracy. And along the way, he falls in love with a stunningly beautiful young woman, only to discover that there is far more to Cherish than meets the eye. Combining the pace, drama, and explosive plot twists of a thriller with his trademark intellectual, linguistic, and comedic pyrotechnics, Glow is Ned Beauman's most compelling and virtuosic novel yet.

My Review: ...and it heals warts when you dance widdershins around it by the light of the quarter moon!

I know book publicists face an uphill battle for the public's attention (read:money), but the breathless promises of ecstatic visions and orgasmic writhings in these things is a dead turn-off. There is no plot twist, even one I didn't see coming, that's explosive. Terrorist bombings are explosive. Let's not wear the horror of the word off in such a banal context.

Anyway. That said, I had a ball reading this book. I like Beauman's sly, side-eye humor, and I appreciate his regular inclusion of gay people with no muss, no fuss, no bother about it. I think his penchant for 20-something guys with superduper rare and strange conditions as main characters should've run its course with this book's Raf who has...CPA? FRS? LLC?...hell, who cares, something that makes his sleep patterns different than anyone else's on the planet. Unlike poor Fishy in Boxer, Beetle, there's no outward sign of Raf's peculiarity, and honestly I was a bit impatient about it recrudescing in conversation so often. But the ending made every bit of it okay. The FIRST ending, I mean, not the second and mostly Schadenfreude-inducing ending which left me chortling for a half-hour after I finished the book.

The whirling, rising, dipping, spinning trip in the middle (looks like I'm not so innocent of using the hyperbole I was complaining about) of the tale never once left me thinking, "okay, I can stop here." I had to make myself stop at time-stamps, or Day changes. I might not have a job, but there's still stuff I have to do that precludes holding a book. I've learned from bitter experience that angling your head for a view of an open book during a make-out session causes hurt feelings and requires many sappy protestations of adoration, etc etc etc. Men, interestingly enough, are *more* likely to feel slighted than women are.

Never let it be said that anyone came away from my blog without some newly acquired knowledge.

But back to Ned Beauman. His books are uniformly enjoyable reads. His hobbyhorses are ridden in different ways each time. But I had to slice a star off for the guys-with-orphan-diseases trope. Mr. Beauman is 30 now. I hope very much we've seen the last of that mosquito-bite-irritating bit of character building. Mind you, I'll be buying his next book the instant I can. I feel confident that it won't be badly used money. It hasn't been yet.
Posted by Richard at 6:30 AM