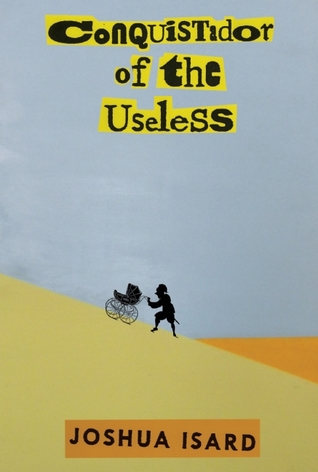 The Publisher Says: Joshua Isard’s debut novel is a hoot. Our hero Nathan Wavelsky moves into the burbs with his wife. Life is good. He’s a successful slacker. He doesn’t want to rock the boat. His definition of a good time is listening to his favorite bands on his iPod and staring at the grass and the poplar trees in his backyard. As a mid-level corporate manager, he does what his bosses tell him. If they want somebody fired, he fires them. No questions asked. But the boat does start to rock. He innocently gives a copy of Kurt Vonnegut’s Cat’s Cradle to a teenage girl and his neighbors are righteously appalled. His wife’s hormones start to tango and now she wants a baby. Sure, he enjoys sex, but that doesn’t mean he wants a baby in the house. Worse, his best friend wants him to climb Mount Everest. Nathan likes to camp and hike, but climbing the Himalayas? He could die, for God’s sake. He just wants to be left alone. But no chance. Shit begins to happen.

My Review: I can't help myself. I have to ask a not-really-rhetorical question that I've already heard many answers to: Why didn't this book light up the tills of all the bookeries of the country? Why isn't at the least a modestly large cult following hollering about this book?

I loved this book. To me, it feels as timely and as timeless as The Man in the Grey Flannel Suit. In a lot of ways it's the same sort of indictment of a culture that Sloan Wilson made: How does a man do a soulless job, make a living at it, and still manage not to spend one erg of energy asking himself the central question of a worthwhile life: Why?

Nathan drifts along with his wife Lisa, not imagining a future any different from the present, when *blammo* Lisa gets the baby message from her hormones at the same time as the couple's mutual college friend Mark shows up to entice Nathan into the most insane adventure on the surface of the Earth: Climbing Mount Everest.

Nathan, Lisa, and Mark are the age of my generation's children. They were, as Nathan notes cynically, raised with the belief that every single one of them was a special little snowflake who could do anything! anything! without mentioning what might happen if the anything they wanted to do was "nothing much." Nathan's nothing much is working for the Sirs, as he calls them, doing a mid-level management job very well. Lisa has her college-admissions job. They live in a nice, leafy suburb of Philadelphia. Why, Nathan thinks, isn't this good enough? Like Tom and Betsy in The Man in the Grey Flannel Suit, Nathan and Lisa have just not talked about some important items for future plans, and now it all happens at once: Lisa's hormones, Mark's insane desire to have Nathan with him summiting Everest, and now the Sirs want Nathan to take on a more remunerative and responsible role at his pretty pointless job.

And with that, Nathan's suspended solids crystallize. Yes, of course, he tells the Sirs, but I'll need ten weeks leave first. I have to go climb Mount Everest with my old college buddy. Amazingly, after some ritual posturing, the Sirs agree; the training begins, Lisa has several meltdowns but ends as we all, including her, know she will: Supporting Nathan. An expensive venture, requiring a lot of training, to do something that Nathan and Lisa both agree has no real value.

In the end, of course, it's the things that have no "value" that are the most precious. As we leave Nathan and Lisa, they're still "slackers," neither has gone into Greenpeace or the Occupy movement; but what they are as people, who they are as a couple, has crystallized.

Luckily for us all, it's a diamond that glitters in front of us and not mere salt. Make some noise, readers, order copies, read them, write reviews! Isard's work should be celebrated!
Posted by Richard at 3:09 PM