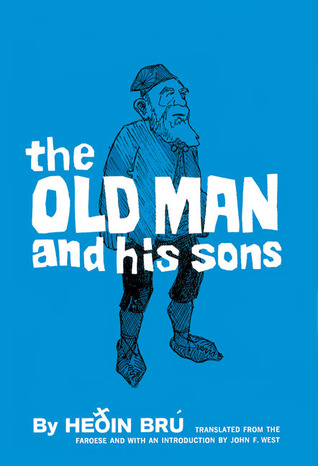 The Publisher Says: These are the Faroe Islands as they were some fifty years ago: sea-washed and remote, with one generation still tied to the sea for sustenance, and a younger generation turning toward commerce and clerical work in the towns.

At the post-hunt whale-meat auction, Ketil enthusiastically bids for more meat than he can afford. Thus when Ketil is seventy, he and his wife struggle to repay their debt.

Heðin Brú (1901–1987), novelist and translator, was considered the most important Faroese writer of his generation and is known for his fresh and ironic style.

My Review: Well, blow me down and call me Shorty! A man who lived through the great transition from subsistence to (relative) affluence in one of the world's remotest settled areas reared up on his hind legs and delivered a jeremiad about it!

I don't speak Faroese, and to my knowledge have never met a Faroese person, so I have no clue if translator West did a good, bad, or indifferent job of translation. In my head these characters had Icelandic accents, since I have met people from Iceland, which is the closest place of any sizable population to the Faroes. This is telling of my response to the book in toto. I don't have much of a place to put it in my mental filing cabinets.

The story, such as it is, centers on an unnamed mother/wife, a husband/father called Ketil, and their youngest son called Kalv. He's a sandwich shy of a picnic, is Kalv, and deeply ashamed and embarrassed by...jeez, everything. Any action he takes is accompanied by anxiety before and tears after. It gets wearing. The mother/wife is a commonsensical old party, always quick to point out the practical solution to the petty or great problems caused or perceived by her menfolk. And do they see problems and troubles! The thatch on the house-roof leaks. Can't get more straw. Oh well, put buckets out. Go south to get the straw? Woman, are you mad? But the men bring home an elderly stray man who is from that southern village, and of course they must take him home as it's a matter of honor. And then the two fools get him killed.

I'd say "oops, spoiler!" except for the fact that I don't expect anyone to read the book. It's God's Little Acre in the North Sea. As it was written in 1940 and only translated into English directly from the original in 1970, we can safely assume the translator felt he was working on an historical document. It has its place in world literature, I suppose, but it's not something I'd push you to read.

So how does that lack of joy turn into a 3-1/2 star rating? It has the virtue of being short. It has a sense of place that I like, the rainy, cold, windy barely sub-Arctic north. And in spite of all other qualities, it's a wistful look at the reality of progress. There's winners and then there's losers. Ketil and his like are always the losers. It's a good idea to keep the losers in your mind's eye, because it's easy to dismiss and ignore Them when in fact it's really all, always and forever, Us.
Posted by Richard at 10:16 AM