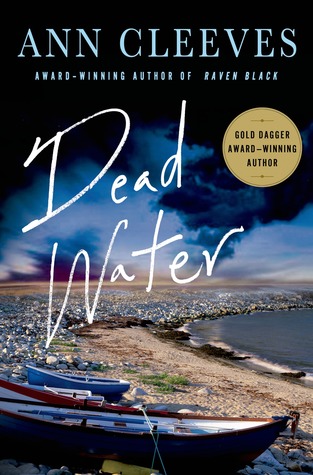 The Publisher Says: Ann Cleeves returns to her critically acclaimed Shetland Island series with this stunning mystery featuring Inspector Jimmy Perez, who readers will remember from Raven Black, White Nights, Red Bones, and Blue Lightning. When the body of a journalist is found, Detective Inspector Willow Reeves is drafted from outside to head up the investigation. Inspector Jimmy Perez has been out of the loop, but his local knowledge is needed in this case, and he decides to help Willow. The dead journalist had left the islands years before to pursue his writing career. In his wake, he left a scandal involving a young girl. When Willow and Jimmy dig deeper, they realize that the journalist was chasing a story that many Shetlanders didn't want to come to the surface. In Dead Water, a triumphant continuation to her Shetland series, Ann Cleeves cements her place as one of Britain's most successful crime writers.

My Review: Cleeves' trademark simplicity of language, her amazing gift for limning a character in a sentence and a setting, her painterly use of color and composition to make the story richer: All present, all accounted for. And it's not one single bit of a surprise that British television pounced on these tales. May they have the monster (comparatively) success that Cleeves' other sleuth-series, Vera, has had.

Originally the books were to be a quartet, which I think we all know means four of something. Here we are on the *fifth* book in the quartet...and a cynical little part of me (known as "the whole body and soul") thinks this fifth entry was inspired by the TV show's existence. I feel it shows in the too-muchness of everything in the story. Too much angst, and from more than only Jimmy the widower. The secondary cast is all angst-ridden, frustrated, scared of something happening, something not happening, something coming out to embarrass them. This gets wearing. In the extreme. It took three days for me to read a book whose predecessors were devoured in hours.

One big surprise is the role of the Fiscal, previously a testy martinet. A new light is shone on her character and a resolution is crafted for her that I myownself felt was too sympathetic. The resolution of the mystery, in fact, seems too sympathetic, and the guilty are, well, sprung on us in a feat-of-detection solution to the logic puzzle that all mysteries are. This isn't my favorite of the series, but I can't deny myself the pleasures of reading even an oversized undermysteried Ann Cleeves novel.
Posted by Richard at 6:30 AM