COUNTDOWN CITY, winner of 2014 Philip K. Dick Award, gets 4 de-grimed stars from me 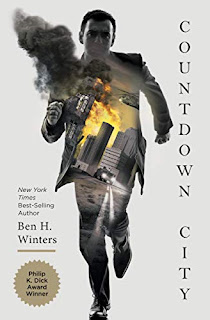 The Publisher Says: There are just 77 days to go before a deadly asteroid collides with Earth, and Detective Hank Palace is out of a job. With the Concord police force operating under the auspices of the U.S. Justice Department, Hank's days of solving crimes are over...until a woman from his past begs for help finding her missing husband.

Brett Cavatone disappeared without a trace – an easy feat in a world with no phones, no cars, and no way to tell whether someone’s gone “bucket list” or just gone. With society falling to shambles, Hank pieces together what few clues he can, on a search that leads him from a college-campus-turned-anarchist-encampment to a crumbling coastal landscape where anti-immigrant militia fend off “impact zone” refugees.

The second novel in the critically acclaimed Last Policeman trilogy, Countdown City presents a fascinating mystery set on brink of an apocalypse – and once again, Hank Palace confronts questions way beyond "whodunit." What do we as human beings owe to one another? And what does it mean to be civilized when civilization is collapsing all around you?

My Review: This book has a helluva gut-punch in it. It has a gigantic eye-opening take on what catastrophe brings out...the apocalypse before the holocaust has surprising actors on its ever-darkening stage.

It gave my poor roommate a sleepless night or two as my light stayed on way past his comfort zone. Sorry, dude, there's books to be read!

I think, though I'm not sure, that one big reason our detective is developing and making his exit meaningful for as many as possible is that this series is a trilogy. The motivating factor being the annihilation of the planet and its people automatically limits the time available for anyone to act! It also allows Winters to load us up with telling details without making it feel like force-feeding a goose for a richer liver.

A point I'm appreciating more as the series goes on is the author's use of astronomical coordinates for the asteroid. It isn't something I saw right away, but it has slowly become a drumbeat of worry behind the plentiful action in the book. I particularly like the fact that, even though it's there from the beginning, its effect is cumulative. Sneakily so.

Off to book three!
Posted by Richard at 6:30 AM