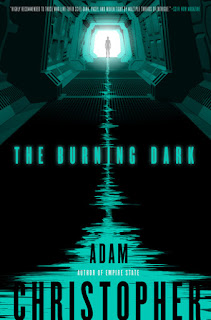 The Publisher Says: Back in the day, Captain Abraham Idaho Cleveland had led the Fleet into battle against an implacable machine intelligence capable of devouring entire worlds. But after saving a planet, and getting a bum robot knee in the process, he finds himself relegated to one of the most remote backwaters in Fleetspace to oversee the decommissioning of a semi-deserted space station well past its use-by date.

But all is not well aboard the U-Star Coast City. The station’s reclusive Commandant is nowhere to be seen, leaving Cleveland to deal with a hostile crew on his own. Persistent malfunctions plague the station’s systems while interference from a toxic purple star makes even ordinary communications problematic. Alien shadows and whispers seem to haunt the lonely corridors and airlocks, fraying the nerves of everyone aboard.

Isolated and friendless, Cleveland reaches out to the universe via an old-fashioned space radio, only to tune in to a strange, enigmatic signal: a woman’s voice that seems to echo across a thousand light-years of space. But is the transmission just a random bit of static from the past—or a warning of an undying menace beyond mortal comprehension?

My Review: Compulsively readable, like all of Christopher's work appears to be. I was up until 12:45a as the pages, it seemed, turned themselves.

I loved Ida (our captain and PoV character is so yclept) for his square-jawed, straight-shootin' inability to lie, tolerate lies, or accept anything less than the facts in any arena. I know him, of course, from a squazillion other books, movies, and TV shows. He's surrounded by snakes and fools, and he's one man against the Universe.

Except he doesn't exist. All the computer records and Flyeyes (combination secretary, file clerk, and cyborg) who run the world's electronic memories agree that Ida isn't. His great military victory against the Spiders (more cyborgs, this time *really* scary) also isn't. And it's one of the very few victories in the war.

This does not sit well with Ida, whose medal for the matter means a lot to him. He can't investigate effectively in the Coast City's orbit around one of the weirdest energy masses in Fleetspace. That's what we call the equivalent of the Free World from the Cold War years.

Ghostly happenings, a lot of fist-fights, a few really really handy coincidences, and the story gets its deeper tale all nice and set up. That's not a knock on the book, by the way. This is a fully realized story on its own, and its resolution is such that the lukewarm responder wouldn't feel the lack of an ending as in so many other series books.

There are a lot of in-jokes (a starship called the Bloom County, for a wonderful example, and a starship called the Carcona captained by a man named Manutius for an Italian flavored other) and a bunch of ideas that suggest, to me at least, that Christopher has read Rupert Sheldrake's books. This is a darn good entertainment with a serious and still shivery point to it. Jeff, Roni: Go now and procure. Everyone else, at least flip through it and see what grabs ya.
Posted by Richard at 6:30 AM