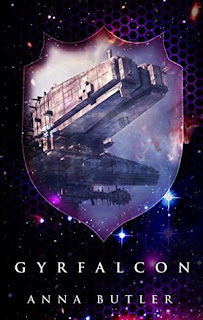 The Publisher Says: Earth’s a dead planet, dark for thousands of years; lost for so long no one even knows where the solar system is. Her last known colony, Albion, has grown to be regional galactic power in its own right. But its drive to expand and found colonies of its own has threatened an alien race, the Maess, against whom Albion is now fighting a last-ditch battle for survival in a war that’s dragged on for generations.

It’s not certain anyone has ever seen a true Maess. They have seen drones: cyborgs animated by a small neural node of organic cells. The first drones the humans met (more than a century previously) were not humanoid in shape but, as the war progresses, the Maess start to produce human-shaped drones.

Taking Shield charts the missions and adventures of Shield Captain Bennet, scion of a prominent military family. Bennet, also an analyst with the Military Strategy Unit, will uncover crucial data about the Maess to help with the war effort. Against the demands of his family’s ‘triple goddess’ of Duty, Honour and Service, is set Bennet’s relationships with lovers and family. When the series opens, Bennet is at odds with his long term partner, Joss, who wants him out of the military and back in an academic, archaeological career. He’s estranged from his father, Caeden, who is the commander of Fleet’s First Flotilla. Events of the first book, in which he is sent to his father’s ship to carry out an infiltration mission behind Maess lines, improve his relationship with Caeden, but bring with them the catalyst that will destroy the one with Joss: one Fleet Lieutenant Flynn, who, over the course of the series, develops into Bennet’s main love interest

Over the Taking Shield arc, Bennet will see the extremes to which humanity’s enemies and his own people, will go to win the war. Some days he isn’t able to tell friend from foe. Some days he doubts everything, including himself, as he strives to ensure Albion’s victory. And some days he isn’t sure, any longer, what victory looks like.

My Review: A classic space opera with a father-and-son reunion that starts a healing process for both men, a crappy demanding spouse whose selfish demands are his undoing, and two worthy mates who, against every single probability in this or any other time, find each other.

This is how you can tell it's fiction.

The space opera part takes up ⅔ of the book. It's really a lot of fun, and any SF fan who loved/s Battlestar Galactica (the 2004 iteration) and The Expanse owes it to themselves to try the first one out. You'll make it if you squint through the sex scene. That's right: One (1) mild sex scene and a good deal of falling in love.

A quibble I have is that I'd like to like poor Joss, Bennet's husband, at least a little bit. As it stands he's a maelstrom of selfishness, shrieking at Bennet as soon as Bennet dares to be one little bit his authentic self. What would it cost to add a little appealing lovingkindness to appear? It's not clear to me, from the man I see on the page, why a muffin like Bennet would've fallen in love with Joss at all.

A minor, minor point when matched against the manifold pleasures of the Taking Shield universe's character developments, background developments, and involving overall arc of story. I am delighted that these second Kindle editions have addressed the earliest reviewers' concerns about some repetitive language etc etc. I found no evidence of such failings in this tale.

Of special interest to me as an old gay man is the relationship Bennet builds with his father, tentatively, in this book. The old man blew his stack when he found Bennet snogging the much older man he would end up married in all but law to; that human failing homophobia was not bred out of us as we went to the stars, depressingly enough. That set off a decade's coldness between father and son that Author Butler has the sense and grace to give Caeden a shot at redemption. He essentially forces the unwilling Bennet to listen to his side of that awful story: He was wrong, he admits he was wrong, and he apologizes.

A dream come true. Any of us who lived through such an event know that this is the emotional core of the series right there. A man coming to terms with his father's love, imperfectly expressed, bone deep, and all encompassing, is an evergreen story. Author Butler gives both father and son the opportunity to speak their piece, and affords her readers the chance to let out that deeply held breath. For many this point of catharsis would be enough value to make purchasing the entire series worthwhile.

But the satisfaction of reading about Bennet's struggles and problems, so personal, so universal, as a gay son of an unhappy parent, a loving spouse to a demanding partner, a starved lover with unmet needs who is surprised by the joy he never thought he was missing...these are the hooks that could, if you'll allow them around your defenses against thoughts that aren't easy for you to relate to, bind you to the series arc for a really satisfying read.

There is so much more to savor.
Posted by Richard at 7:00 AM