THE CHAINS OF THEIR SINS, fourth Taking Shield space opera 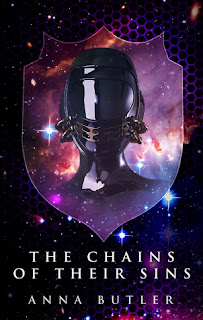 Rating: As near 5 stars as dammit, so 5 out of five

The Publisher Says: Shield Captain Bennet arrives on the Gyrfalcon to take up his final year's posting before returning to the Shield Regiment after his rotation out.

On the Gyrfalcon he faces up to the fallout from Makepeace—ethical, political and above all, personal. Will he be able to accept necessity: that knowing what the Maess are up to outweighs the humanitarian issues surrounding the prisoners he rescued from Makepeace? Can he ride out the political furore that follows the loss of the dreadnought Caliban? How will he cope with an entire year of serving under his father, Caeden? And worst of all, how in the name of every god in the Pantheon can he stand to see Flynn every single day, with the Fraternisation Regs standing between them and keeping them apart?

It will be an interesting year. Bennet can hardly wait for it to be over. Of course, things never really do go to plan...

My Review: Yes, yes, yes, I get it, you're tired of Noble Self-Sacrifice and Dutiful Self-Abnegation. Believe me so am I. I want Bennet to unbend his starchy spine, I want Flynn to throw his man onto the bed and have his way with him, I want this endless tease to end already and, need I say it?, with these wonderful men TOGETHER. So why the Full Five, since that sounds like a pretty big bitch? Because Author Butler made me care. I'm a cynical old man, and she made me invest actual energy in her world, her vision of humanity, and her still-struggling-with-society bisexual male leads.

But these men are showing us real, believable responses to having your back against the ultimate wall: Extinguishment. Erasure. End as final as it gets. Not your personal death, nothing so small as that; the end of your world and your culture, the death of untold numbers of your friends and family and lovers and all the strangers you can't hope to meet, know, love.

It's repression or catatonic dissociation, and there's way too much to do for such self-indulgence. And Bennet can't ever allow himself to forget the Holy Trinity of his entire life: Duty. Honor. Service. His inner life is a shambles, he's never ever again going to sleep a dreamless night after the horrors of Makepeace are burned on his brain, and he refuses to compromise his entire life's foundations to seek the comfort available to him in the love of his man, Flynn.

Well, that dangling thread aside, this fourth excursion into the lives of Bennet and Flynn is deeply painful. Losses mount as the war being fought for humanity's survival drags on. The Maess, whose very appearance is unknown to humanity before Bennet's very brief sighting of what he presumes is an organic Maess back in Gyrfalcon, are clearly not going to give up their war of extermination. Their actions in this book are startling even to me. The tactics are obscure, the strategy cloudy. In the end, the danger to humanity makes the last scene of the book make all the sense in the world. But the fifth volume, Day of Wrath, had better bring some clarity to befuddled fans; and let's not forget that Happily Ever After for Flynn and Bennet, eh what, Author Butler?

England's smaller than the Texas county I grew up in, and I'm ready to go Full American Nutter to get what I want.
Posted by Richard at 8:30 AM