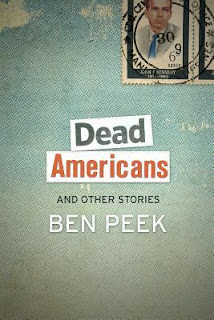 The Publisher Says: Welcome to a world where bands are named after the murderer of a dead president, where the work of Octavia E. Butler is turned into an apocalypse meta-narrative, and John Wayne visits a Wal-Mart.

A world where a dreaming Mark Twain has visions of Sydney, where a crime begins in a mosque, and answers are given to a questionnaire you never read.

Where a dying sun shines over a broken, bitter landscape, and men and women tattoo their life onto their skin for an absent god.

My Review: Disclaimer: I like Ben as a social-media acquainted person. And isn't it a little sad that I need to say that.

What Ben Peek offers to discerning SFnal readers is the same thing that the camera obscura offers artists. He flips the image, sharpens the edges, and shines brighter for the darkness around him. He writes about the world through the fish-eye lens of an observer of the human comedy, often without revealing his own stake in it. These stories offer the reader the unmissable opportunity to take a bite-sized portion of the well-stocked buffet of Ben's imagination. He's written a fantasy trilogy that I think you should read as well, but for now get your mental palate used to the creator's caviar with these ten tales. I will, comme d'habitude, give short responses to them below.

There Is Something So Quiet and Empty Inside of You That It Must Be Precious styles itself a murder mystery. What you wonder as you read it is not whodunit or why, but what the hell took so long. And then the bottom drops out. 3.5 stars

The Dreaming City brings the Winds of Change to Australia via the (factual) 1895 visit of Mark Twain ("the most American of Americans") to Sydney. From there, the Dreamtime grabs Samuel Clemens and brooms away centuries of rage and outrage, replacing them with outrage and rage. 4 stars

Johnny Cash is formally experimental and hugely Australian and left me scratching my ear and just slightly flushed with the embarrassed sense of Not Getting the Joke. 3.5 stars

Possession begins the short cycle of steampunkish dystopian future-earth (?) tales that are the gems of the collection. A Botanist lives inside the Shaft, a void in a dying earth (?) that she relishes for its grant of invisibility to God. Then Rachel falls into her life, the uninvited monster Returned being, and the world ends for them both. 4.5 stars

The Souls of Dead Soldiers are for Blackbirds, Not Little Boys regales us with the nightmare of eternal war, lost futures, and a red sun whose blackbirds eat only the cruelly used and abandoned victims. Gave me bone-shudders as I felt the reality of reincarnation hit me for the first time. 4.5 stars

The Funeral, Ruined dissects the intersection of love and character, without sparing either from a dark-adapted eye. May very well be my favorite story because "And yet, despite herself, she did not." 5 stars

Under the Red Sun is hands down the most technically accomplished story in the collection, and merits my shared favoritism. William who loved Jonas is desperate enough to go to him in his hour of starkest need; Jonas who loved William is regretful enough to help him despite knowing, fully knowing, that it will cause more hurt than any mortal man can bear. 5 stars

John Wayne (as written by a Non-American) is my least favorite story because Wayne wasn't 6'4", didn't have a folksy way of talkin', and was brutally racist so one moment in the time we spend with him makes no sense; oh, and it's Sixth Avenue, LaGuardia be damned with his stupid Americas name. An alternate reality? Yeah, okay, but I'd need a lot more to make me buy in. 3 stars

Octavia E. Butler (a remix) gets, really gets, how sexual predation occurs. I remember little else after the awful sense of having my mother carefully normalize horrible things came rushing back to me. That is why this is a very good, in a technical sense, story; again, we're in an alternate not-Butler's-actual-world. Much to appreciate in this examination of horrors become norms. 3.5 stars

theleeharveyoswaldband is a funny, wickedly sharp recasting of a modern American legend. Timeless, of course, as all legends are, but the only story rooted in an explicit time and that's one that's fast disappearing in the rear-view mirror. The Internet, back when it was capitalized, was a wild and wonderful thing. It got things wrong, gloriously and completely wrong, and the story of Lee is an example of one such thing. Back in capitalized days, the audience was smaller...anyone remember Google-whacking?...and it was possible to make some joyful noise. I think Ben Peek misses that. 4 stars