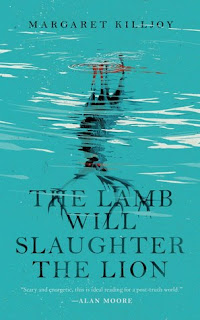 The Publisher Says: Danielle Cain is a queer punk rock traveler, jaded from a decade on the road. Searching for clues about her best friend’s mysterious and sudden suicide, she ventures to the squatter, utopian town of Freedom, Iowa. All is not well in Freedom, however: things went awry after the town’s residents summoned a protector spirit to serve as their judge and executioner.

Danielle shows up in time to witness the spirit—a blood-red, three-antlered deer—begin to turn on its summoners. Danielle and her new friends have to act fast if they’re going to save the town—or get out alive.

THE PUBLISHER PROVIDED ME WITH A REVIEW COPY. THANK YOU.

Genderqueer, gay, celibate, punk, anarchist, shaman-magical people find a town and found a stateless collective that they defend by summoning a demon to make the world stay the fuck away.

Fantasy doesn't get more exciting than this. I'm mortally sick of reading yet another iteration of Lord of the Rings and being told it's New! Different! Amazing! No. It's not. But this? This is new, different, exciting. It even eschews urban fantasy tropes. It's refreshing and I'm eager for the next one, coming out sometime in 2018.

Margaret Killjoy, with your pretty hazel green eyes, you made my reading year. This book is a perfect gift item for the jaded fantasy reader, or the fantasy-resistant reader (me) on your Yule gifting list.

My Young Gentleman Caller picked this book up during his Thanksgiving surprise visit to me. (Hint: If you want to see whether someone is Interested in you not just looking for something from you, bore them. If they hang, they're Interested.) His comments are quoted for y'all's amusement and edification.

The only electric light I saw shone inside a small grocery, which was lit up by its bank of fluorescents. The place was filled with furniture, tools, and food. Well-lettered in red and yellow along the facade were the words: EVERYTHING FOR EVERYONE. A folding sidewalk sign out front read: A FREE MARKET SHOULD MEAN EVERYTHING IS FREE.

YGC: Did you write this? You don't look like a Margaret but it sounds like you.
ME: Nope. Innocent. Though Margaret's got beautiful eyes.
{WE look at @magpiekilljoy on Twitter}
YGC: Appalachia's far enough away.
ME: For what?
YGC: That I don't have to get worried about you wandering off.

It should have been nice. The moonlight came in through the circular window, and she laid on her back as I nuzzled up with my head on her. It had been months at least since I'd been with anyone, even slept next to anyone, and my skin was alive at her touch. I could hear her steady breath, smell her pheromones. For a moment, just a short peaceful moment, I was able to revel in that simple pleasure.

YGC: That made me feel lonely.
ME: Yeah, me too.
YGC: Feeling lonely doesn't scare me as much since I started reading.
ME:
YGC: *keeps reading*

"I have this wicked crush on you," Brynn continued, "but also I'm celibate, at least for now. So I guess I wanted to just get both of those things out there before I get too hung up on you or lead you on. Also there's a non-zero chance we're both going to get eaten by a demon sometime soon."
"I haven't let anyone in for awhile," I said, after thinking about it. "You're a total badass and you're a babe. I mean, you've got everything I should want. But yeah, walls. Lots of walls.
I probably can't be with anyone while I'm like this."
"A perfect match," she said.
"Indeed."

YGC: *finishes reading aloud, stares at me*
ME: (defensive) What?
YGC: ::eyeroll::
ME: What are you suggesting?! (more defensive)
YGC: *peck*

"Fucking hell," Thursday said. "It's almost like you can't summon otherworldly beings into existence, let them loose on your enemies, and set up a culture of worship around them without people getting all crazy."

YGC: I call bullshit!
ME: On what?
YGC: You totally wrote this! That sounds just like you!
ME: Thanks, I appreciate the compliment, but no I didn't.
YGC: Go know from there's another sarcastic old smartass in the world.
ME: Love you too, ya little pisher.
YGC: *blush*

After he finished the book, it was time for the Young Gentleman Caller to meet up with his friends for whatever sporting event they were going to watch. As he left, I got another peck and a quiet, "I love reading with you."

Margaret Killjoy, you ROCK!!
Posted by Richard at 6:30 AM