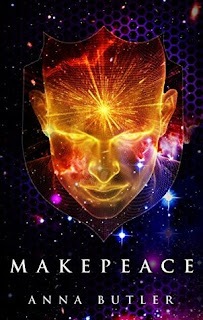 The Publisher Says: Returning to duty following his long recovery from the injuries he sustained during the events recounted in Heart Scarab, Shield Captain Bennet accepts a tour of duty in Fleet as flight captain on a dreadnought. The one saving grace is that it isn’t his father’s ship—bad enough that he can’t yet return to the Shield Regiment, at least he doesn’t have the added stress of commanding former lover Fleet Lieutenant Flynn, knowing the Fraternisation Regulations will keep them apart.

Working on the material he collected himself on T18 three years before, Bennet decodes enough Maess data to send him behind the lines to Makepeace, once a human colony but under Maess control for more than a century. The mission goes belly up, costing Albion one of her precious, irreplaceable dreadnoughts and bringing political upheaval, acrimony and the threat of public unrest in its wake. But for Bennet, the real nightmare is discovering what the Maess have in store for humanity.

My Review: What makes a series work for me is the way the author handles the characters whose lives need to feel real enough to make me go with the unreality of fiction. A series of novels, stories, television episodes...all the same standard. Make me care, make me believe, or make your goodbyes as I move on to greener pastures.

Okay, I surrender. I am officially Author Butler's fanboy. The series has me by the eyelashes and I'm eager to dive into book four, The Chains of Their Sins.

A warning for those who follow me down this rabbit-hole: Do not buy the books one at a time. When you get to the ending of this book, you will be very frustrated if the next book isn't already queued up.

I am an old-time fan of space opera. I like the sweep of a long story. I adore space battles (I'm a guy, shut up). Tech talk isn't up there with dirty flirty but it's close. I want to be told stories that make sense (not necessarily in a straight line you understand, just make sense please) and I like 'em set in space because SPACE my goddesses what could possibly be more interesting?! I mean in fact as well as fiction. And I'm also a big old mushball and want my heroes to find love because heroes have hearts too. Sexytimes are fine, but I *need* my men to fall in love as well as get 'em some or why not just watch porn. (For the sake of argument, you understand.)

So here I am telling you to buy the series, ye fans of SF and ye readers of love-novels but not expecting sex or romance-novel level involvement in our hero's world. He is the hero, the story isn't totally about him, and his world is rich and densely packed with great stuff.

It isn't perfect, of course, but I'll accept the flaws for the great parts.

I'm also really excited by the major development of this book's self-contained plot arc, regarding the military future of Albion.
Posted by Richard at 8:00 AM