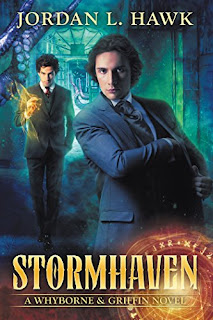 The Publisher Says: Mysterious happenings are nothing new to reclusive scholar Percival Endicott Whyborne, but finding one of his colleagues screaming for help in the street is rather unusual. Allan Tambling claims he can’t remember any of the last hour—but someone murdered his uncle, and Allan is covered in blood.

Whyborne’s lover, dashing ex-Pinkerton detective Griffin Flaherty, agrees to prove Allan’s innocence. But when Allan is deemed insane and locked away in the Stormhaven Lunatic Asylum, Griffin finds himself reliving the horrifying memories of his own ordeal inside a madhouse.

Along with their friend Christine, the two men become drawn deeper and deeper into a dark web of conspiracy, magic, and murder. Their only clue: a missing artifact depicting an unknown god. Who stole the artifact, and why can’t Allan remember what happened? And what is the truth behind the terrible experiments conducted on Stormhaven’s forbidden fourth floor?

It will take all of Whyborne’s sorcery and Griffin’s derring-do to stop the murderers and save Allan. But first, they must survive an even greater challenge: a visit from Griffin’s family.

My Review: My Young Gentleman Caller buys me these. He does it because 1) it earns him major points against problematic behaviors elsewhere and B) he gets to read them too. All readers of romance do it because it's a way of deriving satisfaction not ordinarily available in the real world.


I’m here because I wish to be. Because I love you as you are, right now, today.

Everyone breathing wants to hear that. How many of you have? Ever? And here it is in black and white, clear and unambiguous. Stated as fact from one lover to another. Fantasy fulfilled.

I brought this up to him as we were discussing this book. It is a simple need, the need to be loved; by simple, I mean instantly recognizable and easily understood by all. Why is it so complicated in real life, so difficult to find another who fulfills it?

Book-lovers are better than meat-lovers, who have a regrettable tendency to fart, have morning breath, leave their hair in the shower drain, forget to buy (soy/almond/2%) milk, then get annoyed/upset/offended by being taken to task for these hideous, disfiguring failings. Because they are Party of the first part in their contract with you.

Books are so much easier.

Speaking of "lesser and unworthy" forms of entertainment, in this Platinum Age of episodic entertainment (I am a resolute cord-cutter who ONLY consumes episodes on ad-free streaming, so can't call it TV anymore, while the YGC is not yet so infuriated by the vileness of advertising) we're experiencing, my Young Gentleman Caller and I indulged our fantasy of being filmmakers unafraid to make gay-male Lifetime movies out of this series of romantic paranormal novels (to call them mysteries is to misrepresent their specific strength as stories). It turns out that Boys in our Books blogger Ami asked Author Hawk about that subject several years ago:


A: If the Whyborne and Griffin series was made into TV series, who do you imagine playing the characters?

JLH: I really don’t know! It’s funny, but my characters are so vivid to me it’s difficult to imagine anyone in their places. That said, I’m sure if it did ever happen, I’d be delighted to see an actor’s interpretation.

Our only choice for Whyborne lacks brown eyes, though contacts are perfectly acceptable: No? Straight people. How very odd y'all are.

When it came to Griffin, we had similar unanimity. Our only choice for the role was, in fact, indicative of the reason I enjoy our conversations so much. He proposed: 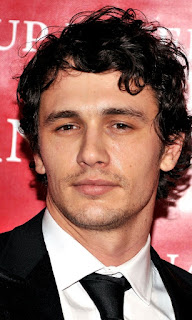 The choice of James Franco was perfect for me, since I'd been thinking the same thing. I was opening my mouth to mention coloring when out the YGC came with, "I think we should just switch the coloring descriptions and leave the actors as they are." This is exactly what I was thinking. I have known very few people in this life who say what I'm thinking before I can get it out, and it's always so much fun to find another one.

Is that why I enjoy the series so much? Because the lad I'm lovin' up gives them to me, reads them with me, plays mental games with me after reading them? No. Not solely that, anyway. I am a fan of the Lovecraft mythos. Author Hawk uses it as a story enhancement. I could do with it being used more, in fact. Also enjoyable to me is the love affair between broken men fighting fears and flaws in themselves while each is surprised that their lover doesn't think they are unworthy and unlovable because of these gigantic, disfiguring flaws. It mirrors my own life experience, flaws so huge the flawed think they're forever undesirable and the loving partner saying, "what's the fuss? I think you're amazing." I am not quite sure where Author Hawk is taking this series in terms of the supernatural elements. I like the Lovecraft mythos because the Elder Gods aren't personal, humanistic gods, they don't even see humans as we are so small and unimportant. We call them gods because their "powers" or abilities are so vastly superior to our own. We even call Cthulhu, explicitly not one of the Elder Gods, a god because his powers are godlike...though he is simply a superior life form in the mythos itself.

Author Hawk isn't creating a quasi-religious fantasy in the series. Whyborne, the sorcerous intellectual, specifically says he doesn't believe in a god in this entry into the series. He doesn't know why his speaking of spells works but he rejects the idea that it's due to some god giving him a gift. That's exactly what I want to hear. That's exactly what I myownself believe. There are things we don't know, questions we can't answer yet, but there's no reason to believe there is A Divine Plan made by A Divine Planner *for*our*benefit*— in fact there's a metric shit-ton of evidence that's absurdly wrongheaded.

So that is the fundamental reason I am Author Hawk's fan. I feel that the stories are aimed at me, designed to fill my specific needs for story-making. And I receive this gift gratefully from the stranger who created the stories for their own reasons, to fulfill their own needs.

Also from a certain lovely blond lad who both wants and knows how to please his old man.
Posted by Richard at 6:30 AM