WE ARE LEGION (WE ARE BOB), amusing way to spend a rainy Sunday afternoon 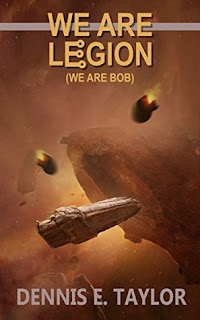 The Publisher Says: Bob Johansson has just sold his software company and is looking forward to a life of leisure. There are places to go, books to read, and movies to watch. So it's a little unfair when he gets himself killed crossing the street.

Bob wakes up a century later to find that corpsicles have been declared to be without rights, and he is now the property of the state. He has been uploaded into computer hardware and is slated to be the controlling AI in an interstellar probe looking for habitable planets. The stakes are high: no less than the first claim to entire worlds. If he declines the honor, he'll be switched off, and they'll try again with someone else. If he accepts, he becomes a prime target. There are at least three other countries trying to get their own probes launched first, and they play dirty.

The safest place for Bob is in space, heading away from Earth at top speed. Or so he thinks. Because the universe is full of nasties, and trespassers make them mad - very mad.

My Review: This is the most male book I've read in ages. I mean, there are two or three women in it but they're onscreen for a hot minute and then gone again. Mostly it's the titular Bob in one of his many regenerated/rebooted/revived selves.

And I think that's why I liked this read so much. It's unapologetic in its geekery.

Bob's a tech bro who cashed out and died at basically the same moment. As a result, Bob's making his early-21st-century geekboy dreams come true by waking up in a theocracy that wants to use him to explore the galaxy...but only because they want to beat the Great Unwashed to any habitable planets there might be out there.


People's capacity for turning dogmatic stupidity into political movements never ceased to amaze me. We've knocked off 99.9% of the human race and somehow the crazies still manage to survive. It just defies the odds.

It defies common sense as well, but that doesn't stop us. I am delighted by this validation of my low opinion of Humanity's sanity. The world Bob wakes up into is very polarized, but things aren't all that different from today. A few changes in the top echelon that are pretty much inevitable anyway. Oh, and...wait, no, discovery is a terrific tease to get the cash register to ring. And Author Taylor deserves your spondulix as much as he does your eyeblinks.

The copyright date on this is 2016. I wish to high heaven that more of y'all had read this tome before the 8th of November.


He and his cronies rammed through far-right policies with no thought for consequences.

That is the sound of Author Taylor predicting accurately the future that is our awful present. I'd ask you to read the book anyway, but really, how can you *not* when the setting precedes the world that it describes?!

Let's say that, for some reason, you're not intrigued by anything I've warbled my fool head off about. You still like to laugh, right?


Belly laughs are one of the best things about being sentient, and you should never miss a chance for one.

Please, please tell me you 1) got the Orwell reference and B) thought it was funny. Let's say you are, for whatever reason, a po-faced old noddycock of a square. Surely you'd like a little snappy thinking as a surfactant for your wet blanket?


Since I doubt, I think; since I think, I exist.

Space exploration was fully living up to my nerd fantasies.

I don’t know why I should be more bothered by the fact of original Bob being dead. Either way, I was a computer program. But somehow, the idea that I was all that was left of Bob felt like being stabbed. I had been—Bob had been—discarded.

If nothing I've mentioned makes you feel the need to splash out a whopping $3.99 on this book, then I pity your spouse/partner. I will say that other criticisms of the book that I've seen bear down heavy on the ending. I'd say they're correct. It doesn't end, it stops; but if you're not amused by it, that won't matter, and if you are, you're going to buy the second one anyway.