SILENT DAYS, SILENT DREAMS is a kids' book in name only 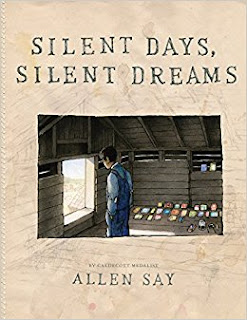 The Publisher Says: James Castle was born two months premature on September 25, 1899, on a farm in Garden Valley, Idaho. He was deaf, mute, autistic and probably dyslexic. He didn't walk until he was four; he would never learn to speak, write, read or use sign language.

Yet, today Castle's artwork hangs in major museums throughout the world. The Philadelphia Museum of Art opened "James Castle: A Retrospective" in 2008. The 2013 Venice Biennale included eleven works by Castle in the feature exhibition "The Encyclopedic Palace." And his reputation continues to grow.

Caldecott Medal winner Allen Say, author of the acclaimed memoir Drawing from Memory, takes readers through an imagined look at Castle's childhood, allows them to experience his emergence as an artist despite the overwhelming difficulties he faced, and ultimately reveals the triumphs that he would go on to achieve.

My Review: I will never be able to thank my friend Joe enough for bringing this book, this artist, this art, into my life. I am so profoundly grateful to you, old friend. 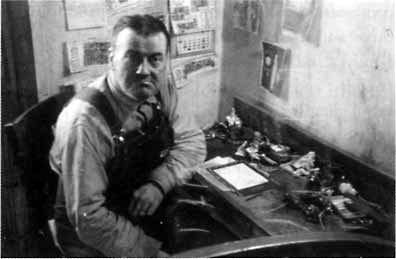 James Castle with the tools of his trade. I don't know the date, but he died at 78 in 1977, so I'll venture a guess at early 1960s...? I'm actually surprised, given how very little the people he lived among seem to have liked him, that someone took his photo at all.

Artist and Caldecott Medalist Allen Say created this artwork at the request of an Idaho-based friend of his. It was his introduction to James Castle...he says of this amazing moment, "I opened the catalog and suddenly remembered the excitement of seeing a van Gogh for the first time." I rang like a bell when I read that. I had just had the same experience opening this book and seeing Say's artworks based on Castle's.

A spread from this gorgeous book.

I've got a reasonably sophisticated knowledge of art. I'm up to speed on "outsider art" and its importance in our visual vocabulary, to our aesthetic landscape. But there hasn't been an experience quite like discovering, via Artist Say, the astonishing work of James Castle in a very, very long time. The sheer breadth of the material he left behind is astounding! Sculptural constructions, drawings in their thousands, mobiles, it's like the man was working against a deadline that only he knew about and was determined to finish saying what he had no other way to say.

The publisher, Arthur A. Levine Books (the imprint responsible for bringing Harry Potter to the US market), is bringing this to us via a damned-near perfect design and production job. The aesthetics of the design you can see for yourself above. If you don't think that it's outstandingly lovely, look at it in person. If you still don't agree, okay, but why? What failing do you adduce to this presentation of two-color artwork mixed with four-color artwork and all presented in a beautiful matte-coated glowingly white space? What artistic flaw do you find with Artist Say's beautiful, spare evocations of the grim and terrible world of James Castle?

And it was a grim and terrible world, a kind of hell that I fear with all my wobbly, trembling emotional heart isn't unique except in its reasonably happy ending. Artist Say has gone as deep as one can into the little factual material of this ordinary life. His bibliography is quite substantial...and disturbingly complete...for someone who, absent Fate's intervention, would simply have vanished without a trace from the collective memory of US society. I knew I could trust Artist Say to tell me the truth about James Castle when I read:


To emulate his unschooled style, I used the same kinds of odd materials he had used: soot and spit, liquid laundry bluing, and shoe polish, to name a few.
I had help. My wife meticulously made dolls and birds out of wastepaper and cardboard that I think the artist would have approved. I drew on ninety-year-old letters and envelopes that {his friend} found in an antique shop; and to mimic James's unsteady lines, I often switched lands—to my left hand, which hadn't learned to tell lies.

Artist Say is the right one to lead us into James Castle's work, and his life and times insofar as any of us can know them. The Seattle Times gives us the jacket of this glorious book in its native environment, the store where you'll be going to spend USD 21.99 (higher in Canada) to bring it home with you. And now you're able to do it legally, since a Federal judge ruled that Artist Say didn't violate Castle's estate's copyrights in offering us, in 28 cases from the 150 drawings in this book, his own artistic impression of specific Castle pieces.

Isn't that a sad statement of our current society's obsession with ownership? A beautiful illustrated biography would quite probably have pleased Castle, whose early relationship with books (despite being unable to read or write) was a loving and profound one. Not at issue were any facts, any alleged misrepresentations of Castle, his family, anything...just ownership of the images and therefore the right to profit from them.

Had I been related to Castle I'd've cringed in shame for the picture painted of a cold, uncaring, even cruel "family" that frankly seems to me to be culpably negligent and abusive of their child/sibling/educational charge. They sound like horrible people and I'm glad they're dead.
Posted by Richard at 6:30 AM