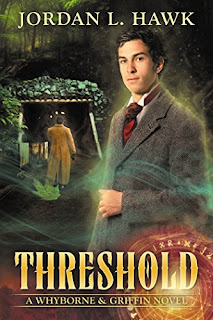 Rating: 3.5* of five, rounded up (actually out of four because there's a cat presented as a suitable companion animal for humans, which costs the perpetrator one star automatically)

Whyborne, Griffin, and their friend Christine travel to Threshold Mountain, a place of dark legend even before the mine burrowed into its heart. A contingent of Pinkertons—including Griffin's ex-lover Elliot—already guard the mine. But Griffin knows better than anyone just how unprepared the detectives are to face the otherworldly forces threatening them.

Soon, Whyborne and Griffin are on the trail of mysterious disappearances, deadly accidents, and whispered secrets. Is Elliot an ally, or does he only want to rekindle his relationship with Griffin? And if so, how can Whyborne possibly hope to compete with the stunningly handsome Pinkerton—especially when Griffin is hiding secrets about his past?

For in a town where friends become enemies and horror lurks behind a human mask, Whyborne can't afford to trust anything—including his own heart.

My Review: These stories are all in the Lovecraft Mythos. I think I wasn't au fait when I began the series. This makes my feelings about the reads quite different.

Whyborne and Griffin get invited to dinner at the home of Whyborne's much-despised daddy. He hires Griffin, thus also his son, to investigate paranormal doins at a mine that supplies his railroad. They recruit Christine Putnam, Whyborne's Egyptologist/Annie Oakley-level shot colleague at the Ladysmith Museum, as the backup muscle. (Seriously, does it matter why she's along? She has to be, so let's go with it.) They go to some ghastly little horror-movie burg in West Virginia (a state in which I say, from my own experience, there is nothing but horror-movie burgs):


The heights blocked the prevailing west-east breezes, leaving the air stagnant and still. Mosquitoes hummed above pools of water in the unpaved streets, and sweat prickled my neck beneath my collar. I longed for a bit of shade, but the lack of trees anywhere within the town made it a forlorn hope.

And this, laddies and gentlewomen, is Whyborne's first-ever trip away from Massachusetts! I can see the setting, I can feel the depths of utter horror poor, poor Whyborne experiences as he sees this vista of how the other 99.99% live.

The town is insular, cut off from reality, and that makes it vulnerable to alien invasion by creatures from outside our dimension of reality. (Watch that linked video on the Lovecraft Mythos!) In fact, the same thing that the white folk are using the mountain for...coal...is what attracted the aliens to the site. I don't know what spidercrabscorpion aliens would want with coal, but then I wouldn't, would I, what with being human and all. The aliens are called yayhos by the humans they...get to know...and are really, really, really revolting. It's mentioned several times that they smell of ammonia. Not a favorite smell of most humans. And what they say they want, just to be left alone to pillage our planet, makes them deeply analogous to Western colonial powers using Africa in the same late-19th-century timeframe as these books are set. The yayhos have a deep-seated need to learn and explore. Check. They have a callous indifference to whom they hurt in the process. Check. Small groups of them can inflict major damage on us, the natives. Check.

So no one needs to smirk condescendingly about the one-dimensionality of the story. It is making its social commentary and coming (!) to the correct, socially progressive conclusions on many fronts. The conditions for the miners in the town are portrayed accurately and judged harshly; race relations enter into the story and are dealt with accurately and found wanting; the role of the Pinkertons, Griffin's erstwhile employers, as forces of regressive and repressive capital is presented as part of a sub-plot linking Griffin to Elliot, the Threshold Pinkerton manager and Griffin's long-ago savior when he ran away from home to go to the Big City of Chicago.

Also coming out (!) of this entry in the series is the acknowledgment and inclusion in the arc of Griffin and Whyborne's relationship are the two stonking elephants in the room: Whyborne's life of privilege vs Griffin's hardscrabble beginnings; and Griffin's horrible, nightmarish confinement to a madhouse after he first encounters the Lovecraftian side of life. That was lightly touched on in the first book, Widdershins, but here we're faced with the man who found Griffin and made him a Pinkerton in the first place in Elliot. He was also the man who, after Griffin faced the madness-inducing terrors that cost him a partner in service of a Pinkerton case, slung Griffin into a madhouse. And walked away, never looking back. Elliot and Griffin have a lot to say to each other. They say it at an inopportune moment, sadly, leading to Whyborne coming to the hotel where he, Griffin, and Christine are all staying just as Elliot is leaving Griffin's room. A fight, unsurprisingly, ensues, in which some hurtful stuff is said and much, much miscommunication is experienced.

Griffin pleads to Whyborne in defense of his libidinous history with Elliot and with his dead partner Glenn, whose wife and kids were offered up to Whyborne as misdirection when he wanted to know if Griffin freaked out about Glenn's death because they were intime. Finding out that no lie was told makes not one jot of difference, of course, to Whyborne's sense of outrage:


“Believe me when I say I did a great deal more with other men, some of whom, yes, were married. It’s not unusual, you know. Many men like us have a normal family as well.”

It was, and is, ever thus. I speak from long, long experience when I say that this is going on right now and chances are much better than even that you know a couple where one or the other of the partners is in denial about her/is sexual preference. Especially if you live in a red state, or are a member of a religious community with strong opinions about how gawd wants people to eat/dress/fuck. Almost certainly you do if you're over 50.

But the author has much more in store for us than mere social engineering. We're going on a guilt trip! Perfidy abounds; double dealing reaches art-form nicety; the irredeemable are all around us, and their fate is condign. The biggest surprise comes as Griffin and Whyborne come out to each other as lovers:


The fingers of his free hand caught my chin, gently turning my face to his. His green eyes shone, and the smile on his mouth was soft and sweet. “You are my joy, Ival {this is Griffin's hideous nickname for Whyborne, who unsurprisingly hates to be called Percy}, and I love you more than I thought possible.”
Emotion tightened my throat. “As you are mine.”
“Even if I’m just the son of a farmer from Kansas, who happened to have a talent for mimicking his betters?”
I traced the line of his jaw, until my fingers came to rest just beside the curve of his lips. “You’re not just the son of a farmer from Kansas, or even the orphaned son of an Irishman, or anything else.”
“I’m not? Then who am I?”
“A good man. A man who wants to do what is best, by his friends and the world. But more importantly, the man I love.”
His smile was like the breaking of sunshine through clouds. “I think I can live with that,” he said, and kissed me again.

And that right there? That slayed me. What makes me read light romantic fiction, given the years and years of reading...forty-nine years since I got my own library card, fifty-two since I asked for and got my first very-own book...one might wonder. This is what: I want to believe. After almost sixty years on this wide green Earth of ours, I still want to believe that stories tell us truths we're waiting to live, show us goals we can actually achieve, let us love the loves we let go of, lost, failed, never found, just as if they were here and now.

There's not a lot of sex in these...wait...I've recently been told a book that had so little sex in it that I described it as heterosafe was, in fact, not so. I'll say this: The sex in this book is put in places and set at heat levels that match the storytelling. It's not shoved into places it shouldn't go, in other words.

I stared at that phrase for a good while before deciding to leave it there. If that double entendre makes you purse your lips, do not ever, ever buy, borrow, or gawd forbid *read* these books!
Posted by Richard at 6:30 AM