THE ARMORED SAINT, being an almost-5 star appreciation of a writer's unexpected gifts 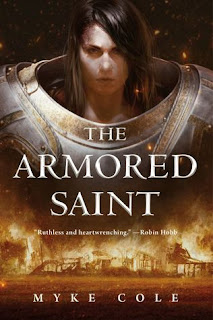 The Publisher Says: In a world where any act of magic could open a portal to hell, the Order insures that no wizard will live to summon devils, and will kill as many innocent people as they must to prevent that greater horror. After witnessing a horrendous slaughter, the village girl Heloise opposes the Order, and risks bringing their wrath down on herself, her family, and her village.

THE PUBLISHER SENT ME AN ARC...THANKS FOLKS

My Review: I have a confession to make right off the bat: I didn't request this book. My Tor.com Publishing contact, knowing I am big on books with queer representation, figured I'd like this and sent it along. I looked at it in some surprise because it's by Myke Cole, The Shadow Ops-superhero-y military SF guy. If you've paid me the smallest bit of attention before now, you know I detest superhero-y crap and am only enjoying milSF from a gay-male PoV these days. I was a history major. I've had my fill of battlefield stuff for its own sake. Talk to ME, the elderly queer gent, not the strategist/armchair general, or I got better uses for my eyeblinks.

Author Cole, I am profoundly sorry I pigeonholed your work. I was wrong to do so and I'm glad to learn the error of my intolerant ways in so pleasant a fashion.

This fantasy world is deeply satisfying. It's oppressively ruled by a military/religious Order, but run in time-honored community-based democratic ways. Being staunchly anti-religion, that setup is one I'll buy into immediately. I'm not insensible to its relevance to the current state of affairs in our current US, our very own Russian satellite state, either, though that is not to ascribe my beliefs to Author Cole. I am not acquainted with him and make no representation that what *I* take away from his work is what he intended that I take away from it. That disclaimer being made, moving on.

The basis of this story is simple: How does a person, raised in a world that does not jibe with the True North on their inborn moral compass, survive and live and love in it? Can that happen without a struggle, a fight, a battle, or even an outright war? (MAJOR SPOILER: Nope.) What does it take to be authentically yourself in a world that dislikes you for being who you are?

Heloise Factor demonstrates her nature as a skeptic and a misfit from page one of the book, so I'm not really spoilering anything. Heloise confronts the arrogant cruelty of the adult world from page one and is saved from the terrible consequences awaiting the powerless for protesting abuse of power by the skin of her teeth. It's a terrific way to understand the worldview of Heloise's society and get the general course the book will take from here on in. Heloise intuitively understands the Buddha's injunction: "Believe nothing, no matter where you read it or who says it, unless it agrees with your own reason and common sense."


Her father was lying, not just to her, but to himself. Worst of all, he expected her to repeat the lies, to act as though up was down of her own free will. It was a stupid, wicked way to live, and the smoke still smudging the darkening sky showed her how it ended.

Beautifully said, perfectly true, and in the context of a young person just coming into her rightful place in the world, immensely powerful. It *is* a stupid, wicked way to live and it behooves us as citizens of a world that squashes our inner selves daily to remember that "First, do no harm" is not just Hippocrates talking to doctors but the accumulated wisdom of the ages speaking loud and clear to each and every one of us.

One of the squashings of personal truth has always been sexuality. Female sexuality has come in for the most squashing in modern times. The very existence of female sexuality, of women's right to control their own bodies and use them as they see fit, is taking center stage in the culture wars at last. Part of that demand for control includes the right of a woman to be in an intimate relationship with another woman. This sets religious nuts aflame, as we all know. Heloise's society is as homophobic as our own. Luckily for Heloise, like we would want for any child ready to burst into adult sexual flower, she gets good, solid, commonsensical guidance:


No. It is a person you love. Not a name. Not a she or a he. A person in all their shining glory. There is a thing in us, Heloise. A seed. It makes us who we are. It is our core. That is the thing we love. It alone exists. It alone is holy. It has no home, no name. It is neither male nor female. It is greater than that.

How I wish someone had said similar words to me when I was first mooning about, utterly in love with Davy Jones of the Monkees! I assure you that my longings were understood and VERY MUCH NOT supported by my "family." Heloise's society is down on her womanhood and her same-sex sexuality. Author Cole has added to her burden of seeing through the veil of lies she's been force-fed. Now what else can go wrong in the woman-child's life?

Obviously I want you to buy and read the book, so I can't get too detailed or else why bother? Suffice it to say that Author Cole is a mean, mean man who has no smallest shred of kindness to extend to Heloise. Which is what the reading of fiction is for, right? The ancient Hellenic society that invented drama and comedy did so for this very purpose, after all, and called it catharsis. The deep cleansing of experiencing intense emotions from a safe, removed place is the source of story addiction, I am certain. What could possibly be more indicative of this than the long survival of the Mahabharata, the Iliad, the Bible? Humans are built to need story to survive. Our very consciousness could be a by-product of the mind creating explanatory narratives.

So Heloise is out of sync with her culture's narrative, and from the get-go she has a visceral experience of what happens to those who flout the keepers of the narrative's rules. And then sees her honored and beloved father support the master (!) narrative, even though it means condemning another to almost certain death, so the Greater Good will be served. And *still* she refuses to conform, to knuckle under and do what is expected instead of what is Right. That's what makes her journey one we should all follow, at the very least between the boards of a book. I hope people with probably-lesbian young (grand-)daughters will buy this book and give it to them, as well as any and all adolescents wrestling with the certainty that they're just different somehow. (Sneak in a read yourself, you'll like it too.)

The minuses of the book are fairly few: There aren't adult female models for Heloise to emulate so one wonders how she got the idea a mere girl could do what she sets out to do; the Standard Fantasy Trope of Capitalizing Things To Make Them Different is in evidence; the ghastly scourge of Adolescent Exceptionalism (see what I did there? heh) is abundantly present. In fact, if the entire point of the book wasn't so exactly in line with my own inner agenda, Heloise's headstrong foolishness in taking on the entire adult world's power structure would make me roll my eyes and consign the book to the recycle pile (which, I hasten to add, does not mean the trash but the catch-and-release world of BookMooch).

As it is, I think Heloise's theme was sung in 1979 by McGuinn, Clark and Hillman. She deserved so much more than she got from her world, as do so very many children. It's long past time adults recognized this and got on the change bandwagon. Here in the US, we need to make our children safe from death while they're at school, at home, at church (if they're forced to go there), the movie theater, the mall....

This sounds like one of my five-star reviews...where's that last tenth of a star? I took it away because I am gut-churningly jealous of how young and handsome Author Cole is. Petty of me, I know, but there it is.
Posted by Richard at 6:30 AM