RADIANT FUGITIVES, debut novel from a recovering capitalist has all the heartfulness 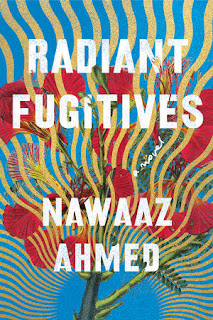 The Publisher Says: A tour-de-force debut following three generations of a Muslim-Indian family confronted with a nation on the brink of change in Obama-era San Francisco and Texas with a blockbuster ending you have to read to believe.

Working as a political activist in the early days of the Obama presidency, Seema still struggles with her father’s long-ago decision to exile her from the family after she came out as lesbian, forcing her to construct a new life in the West. Now, nine months pregnant and estranged from the father of her unborn son, Seema seeks reconciliation with the family that once renounced her: her ailing mother, Nafeesa, traveling alone to California from Chennai, and her devoutly religious sister, Tahera, an OB-GYN living in Texas with her husband and children.

Pushed apart and drawn together in equal measure by their often conflicting beliefs, Seema, Tahera, and Nafeesa must confront the complex yearnings in their relationships with one another—and within their innermost selves—as the events that transpire over the course of one fateful week unearth an accumulated lifetime of love, betrayal, and misunderstandings.

Told from the point of view of Seema’s child at the moment of his birth and infused with the poetry of Wordsworth, Keats, and the Quran, Radiant Fugitives is an operatic debut from a bold new voice, exploring the tensions between ideology and practicality, hope and tradition, forgiveness and retribution for one family navigating a shifting political landscape.

My Review: Debut novelist Ahmed has done something special with this book. He has chosen to tell a story of rigidity and rage, of tenderness and forgiveness, and of sadness and loss from the point of view of a perinatal infant whose mother has died in trying to give him life.

That is a bold decision. And it's not a spoiler because there's no way you could possibly miss it...the author says it plain and straight on the first page. I spent the first few pages a little unsure of the wisdom of it, because it will inevitably lead to the Satanic Second Person sooner or later. (Sooner as it turns out.) But the choice, like all bold gambles, carries a certain momentum that either weighs the reader down or drags him along in its wake. I was dragged. I wasn't sure I would be. When the infant addresses his grandmother as "Grandmother," I confess I winced and even pooh-poohed the idea. I was too taken in by the way Seema, the "hasbian" (in the ugly, dismissive formulation I've heard lesbians use towards one who marries a man...why not "bisexual" I've always wondered) mother of this child, was continually struggling to find her footing in the narrative...bad choice for a narrator; Nafeesa, the terminally ill grandmother, was too cowed and rendered voiceless by her entire life's denied course; Tahera, the rigidly religious sister, was too ragey and resentful. No one else matters, their quiet places in the story don't ripple strongly enough to compete with the women and their unborn male relative. I definitely include the father in this. Poor bastard.

Back to our narrator, Ishraaq (meaning "Dawn"). He is the right choice to tell us this story because, like all infants, it's the story he inherits by his simple act of drawing breath. So my cavils were set aside, and the story progressed...familiar things happened. For example, I recognized the divide between the sisters as superficially being about their differing faith-walks but really being about the disfiguring jealousy of sisters denied the place they thought was theirs. Sibling rivalry was always going to rip their relationship to shreds. Their mother wasn't capable of standing up for herself, still less her daughters, against their forceful father and his ungovernable passions for poetry and control. Keats isn't used as a love language in their family so much as an armory of unresolvable resentments...it's their father's favorite work, and their mother was bludgeoned with it despite her love of her native Urdu and its vast, beautiful literature.

As an adult, Ishraaq's mother is an out lesbian. That goes over badly with her devout Muslim father. Mother, of course, submits her actions to her husband's control. They cut their heretical daughter out of their lives. And she, for her part, builds quite a world for herself in activist politics, while her dutiful and Muslim younger sister becomes a family physician...so no slouch in the brains department. Such a lot of anger for Big Sis from childhood...it quite naturally fuels her religious rejection of Seema for her lifestyle. In his role as narrator, Ishraaq doesn't dwell on the particulars of his mother's sex life, which I think was a good authorial call. It doesn't feel to me as though anything in the story requires us to follow the characters into their bedrooms. I noted the fact that we mostly hadn't, and then thought, well, what a great way to make use of such a narrator!

What I didn't find so believable was the way Ishraaq was sometimes omniscient, discussing things that would be impossible for him to know because the belly he was inhabiting was elsewhere. A conversation between his father and grandmother marked the first time I was jolted into awareness of the issue. It's here that the reader will stall out..."this is impossible, forget it"...or will reach the accommodation that I did: "we're assuming a consciousness is Ishraaq, not the infant flesh is Ishraaq, and the story ends when he's mere moments old." I'll get past my collywobbles re: magical narrators if there's at least a shred of a line to cling to as I suspend my disbelief. It was a close-run thing, though.

Events happen that ground us in the US of 2010. Obamacare, Kamala Harris as a candidate for Attorney General, mosque vandalism...all struck resonant chords in me. I was also taken by setting the narrative in San Francisco for the most part. I loved the atmospheric descriptions of San Francisco's fog belt, and the evocation of Dolores Park. The use of color in the book is quite elegant...a deep, unrepentant purple sky!...as is the food the characters prepare, offer, consume. There's a much-needed specificity to these moments. A great deal of the book feels less moored, grounded, because it's a flashback. The past that Ishraaq narrates, or observes I suppose, and then describes, is of necessity less vibrant than a directly shown and not told timeline would be. In many ways this choice was made when Author Ahmed chose his narrator. There really is no other practical way to tell a story from that point of view.

There are secondary characters with arcs that will shock you. There are characters whose "it's all my fault"s rang in my ears as solipsistic and self-important. There are moments of sheer blithering idiocy when decisions that should've been postponed are instead made and made badly. And that's one of the best things about the book to me. I enjoy a story with real-feeling stakes...death is a real stake, and there's more death in the book than is at first evident. The "radiant fugitives" of the title, what elicits that particular descriptive phrase, make for one of the book's set it down and say "wooow" moments.

But even the death serves its purpose. People are never more themselves than when they are around death. The selves they are, all too often, are not the selves they want to be. And it's this immense tension that gives Radiant Fugitives its narrative drive, its memorable ending, its full measure of sadness and rage, love and compassion. It's a book that forgives its characters for being less than their best selves and giving less than their all when they're called to step up. The ending will strike some as overdone, it did me, but it was most certainly an organic, honest ending to the story we started out reading. That makes the journey a good and worthwile one, and as a debut novel, one of above-average skill to create.

But, and I mean this, someone at Counterpoint needs to fix "Irvine, Texas" to read "Irving" because Irvine's in California. Irving's in the Dallas-Fort Worth Metroplex.