SENSELESSNESS, short and bitter and galvanizing...literary double espresso, genocide and atrocities oh my 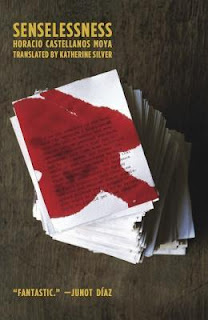 The Publisher Says: A boozing, sex-obsessed writer finds himself employed by the Catholic Church (an institution he loathes) to proofread a 1,100 page report on the army's massacre and torture of thousands of indigenous villagers a decade earlier, including the testimonies of the survivors. The writer's job is to tidy it up: he rants, "that was what my work was all about, cleaning up and giving a manicure to the Catholic hands that were piously getting ready to squeeze the balls of the military tiger." Mesmerized by the strange Vallejo-like poetry of the Indians' phrases ("the houses they were sad because no people were inside them"), the increasingly agitated and frightened writer is endangered twice over: by the spell the strangely beautiful heart-rending voices exert over his tenuous sanity, and by real danger—after all, the murderers are the very generals who still run this unnamed Latin American country.

I RECEIVED A REVIEW COPY FROM THE PUBLISHER AT MY REQUEST. THANK YOU.

My Review: It's a horrible, horrible story; it destroyed its narrator and bid fair to make me a whispering zombie; man's inexpressible vileness and irreducible cruelty are a weight too heavy for me to bear. His task is to copyedit a human-rights report commissioned by the Archbishop to ascertain the guilt and/or innocence of the parties to a genocide. Every step of the narrator's descent into mental illness's loudest darkest corners is punctuated by italicized phrases he's culled from this report...all one thousand one hundred pages...for their unusual, beautiful, euphonious horror: I am not complete in the mind greets the reader on page one. A man who lived beyond the violence that stole his family from him utters those words, to a psychologist, as the report takes shape, as the professional records the words and assesses the soul that left the body of the speaker, so as to bear witness.

I didn't read the original Spanish, but I'll wager there's nothing significant lost in Katherine Silver's translation. It's too precisely evocative. It's also extremely prolix in its one hundred forty-two pages. Words pile up, words wind around your eyestalks, words make dizzyingly alien geometries as they flow from the desperately purging narrator. Words distance him, though not the reader, from the blood and hate and evil he must view as structures and concepts in order to earn his five thousand United States dollars for copyediting one thousand one hundred pages of agony. The slaughter of untold bodies is actually the less revolting part of the tale...Wounded, yes, is hard to be left, but dead is ever peaceful is not something a grandmother should have cause to say of her murdered descendants...and the litany of one thousand one hundred pages reminds us that the narrator is doing a job, is taking the written results of an investigation, is applying grammar and punctuation to the massive, traumatized shouting of the victims of genocide.

We all know who are the assassins.