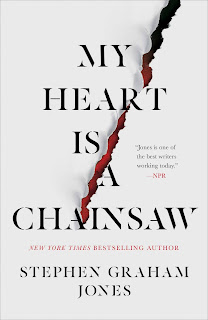 The Publisher Says: In her quickly gentrifying rural lake town Jade sees recent events only her encyclopedic knowledge of horror films could have prepared her for in this latest novel from the Jordan Peele of horror literature, New York Times bestselling author Stephen Graham Jones.

“Some girls just don’t know how to die…”

Shirley Jackson meets Friday the 13th in My Heart Is a Chainsaw, written by the author of The Only Good Indians Stephen Graham Jones, called “a literary master” by National Book Award-winner Tananarive Due and “one of our most talented living writers” by Tommy Orange.

Alma Katsu calls My Heart Is a Chainsaw “a homage to slasher films that also manages to defy and transcend genre.” On the surface is a story of murder in small-town America. But beneath is its beating heart: a biting critique of American colonialism, Indigenous displacement, and gentrification, and a heartbreaking portrait of a broken young girl who uses horror movies to cope with the horror of her own life.

Jade Daniels is an angry, half-Indian outcast with an abusive father, an absent mother, and an entire town that wants nothing to do with her. She lives in her own world, a world in which protection comes from an unusual source: horror movies…especially the ones where a masked killer seeks revenge on a world that wronged them. And Jade narrates the quirky history of Proofrock as if it is one of those movies. But when blood actually starts to spill into the waters of Indian Lake, she pulls us into her dizzying, encyclopedic mind of blood and masked murderers, and predicts exactly how the plot will unfold.

Yet, even as Jade drags us into her dark fever dream, a surprising and intimate portrait emerges…a portrait of the scared and traumatized little girl beneath the Jason Voorhees mask: angry, yes, but also a girl who easily cries, fiercely loves, and desperately wants a home. A girl whose feelings are too big for her body. My Heart Is a Chainsaw is her story, her homage to horror and revenge and triumph.

My Review: There are all sorts of ways to read a Stephen Graham Jones book. Surfaces work...there's always a story hanging around, you won't be wandering lost in thickets of writing-armpit sweat-watered weeds...references work too, you can unpick your memories of the midnight movies or frightfrests your friends threw (or open IMDb if you're really young)...but I think the best way is to make it through as it's happening, to be there as Jade walks across the graduation stage or through walls or up into skies limited only by the basic laws of physics.

The reason I feel that last works best is that, by the time I'd reached the end of this read, and then read Author Stephen's Acknowledgments after the wrenching and impossibly sad final scene, I was so wrung out that I simply accepted that everything I'd just been through had been intended to do what it did to me. As I'm not one to write book reports (ask Mr. Singleton! never turned so much as one in during high school) I'm not going to try to do that at this late date. I referred to this book's immediate older sibling, The Only Good Indians, as "gore with more" and that's an assessment I stand by as applied to all of Author Stephen's books. Part of that "more" is the strangely hypnotic effect of the story arc receding from view...the interstitial "SLASHER 101" essays addressed to the One Good Teacher (of history, naturally) Mr. Holmes are well and truly weirding Your Faithful Reader out. When they switch addressees, it gets even weirder...but in the end, it's painfully intimate and deeply instructive to read them.

In common with all Author Stephen's books, you mere peon of a purchaser have no rights. You're not stupid, you've read some of his other work (at least The Only Good Indians!), you're aware that horror is in store. So surrender your volition. Then the entire experience of being in Jade Daniels's rage-filled head makes all the sense in the world. Because then you're not actually sure if ANY of this is happening in meatspace. Is this an adolescent with anger and abandonment issues responding to the end of what never was childhood? Is this a young woman processing the pain and rage of a life that was wished on her by weaker, worse people than she was? There's a sparkling moment of fizzing delight when Jade meets Letha, a beautiful rich kid whose father has a trophy wife and whose presence in the town of "Proofrock" (think a minute, and hard, for more than the surface snicker; that's all it takes to turn it into a shiver), when Jade anoints her "the Final Girl." That's both when the tale gets grounded in consensus reality and when its ascent into the dark and cold vault of Jade's own head is cemented.

I'm always a fan of gerunding done with panache...Author Stephen does it with panache. At one point, Jade Holden Caulfields across a lawn, and that's me dead cackling. I think there are few greater pleasures than easter-egging your readers' experience...hoping they'll get most of them. I think the fun of reading a book whose author has chosen a niche to write in, one with an astoundingly vast mythos/history/background to explore, is in part the recognition factor of word-play. Yes, it's about slasher-film homage, and no Holden Caulfield isn't slashed to death (though generations of English students have no doubt fantasized that Salinger met that fate after writing it), but he *is* the prototype of the Angsty Teen too smart for easy answers. With everything Jade's carrying around, she's not one whit less burdened than Holden and possibly by some similar troubles given that she's got A Thing growing up strong for Letha.

Adolescent sexuality is always fraught. Parents play their roles in shaping it, either with rule or without them, with clamp=downs or without supervision, there's no right way to ride this roller-coaster. But the issue facing Jade isn't made any easier by her absolute conviction that Letha is The Final Girl, that staple of the slasher film, therefore of necessity being lustrous and almost superhuman in her glorious Otherness. That's how she's supposed to be, right? Jade "doesn't make the rules...just happens to know them all." Her unique and defining obsession with slashers is gong to pay dividends, right? Because she's preparing the Final Girl for her role, unlike most...she won't be surprised by the tragedies.

I think I speak for all readers when I say that the way this blows up can only be described as FUCKING EPIC.

And from that point on, the cigarette boat is away and the pace does not let up.

There are the obligatory twists and turns, the reveals that aren't *quite* reveals, and the accustomed ways that Author Stephen's practiced to get your kishkes kicking and your shvitzer sprinkling. You can't fault the man on delivering the suspenseful goods! If you're in the market for a low-gore delivery of suspense, however, look elsewhere. The way this works is for your expectations to be manipulated so I won't be discussing particulars. Suffice to say I was taken in. More than once. And I'm a pretty well-broken-in reader....

Still, there's no point it wondering why no good deed goes unpunished or how exactly it is that one's expected to walk away from what can not help but feel like a set up straight from a film. The pain and the passionate pull of it will reach some screeching crescendo, won't it, just give it a little more time and it has to!

By the time we've reached the moment when there is no more to give, when the entire story's gone to the most extreme place that it can go...there is something more in the tank for a send-off, and there's no way that you'll believe your eyes when you get there.

Some things just can't be put right. And others can't be left wrong. The issue is...who decides.