THE ONLY GOOD INDIANS, Stephen Graham Jones's exploration of madness among Rez refugees 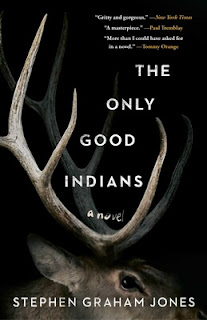 WINNER OF THE 2020 SHIRLEY JACKSON AWARD FOR BEST NOVEL!

WINNER OF THE 2020 THIS IS HORROR AWARD FOR BEST NOVEL!

WINNER OF THE 2020 BRAM STOKER AWARD FOR SUPERIOR ACHIEVEMENT IN A NOVEL!

The Publisher Says: A tale of revenge, cultural identity, and the cost of breaking from tradition in this latest novel from the Jordan Peele of horror literature, Stephen Graham Jones.

Seamlessly blending classic horror and a dramatic narrative with sharp social commentary, The Only Good Indians follows four American Indian men after a disturbing event from their youth puts them in a desperate struggle for their lives. Tracked by an entity bent on revenge, these childhood friends are helpless as the culture and traditions they left behind catch up to them in a violent, vengeful way.

I RECEIVED A DRC OF THIS NOVEL FROM THE PUBLISHER VIA NETGALLEY. THANK YOU.

My Review: The alert readers of this blog will have noticed that I've been on a Stephen Graham Jones kick here lately. Actually, what y'all don't know is that this is only the tip of the iceberg. I've been *reading* Author Stephen's work for a long time, and haven't reviewed them here because I've bought them for myself. How can I reasonably ask publishers for free reviewers' copies if I'm just gonna go buy 'em and review 'em anyway? What sane businessperson would sign up for that deal?

So my silence is broken by this DRC approval, and I've grandfathered in all the earlier and later stuff because Y'ALL. AIN'T. FOUND. HIM. YET. I mean, in your millions who buy Clive Barker and Stephen King. That's the audience that Stephen Graham Jones merits. Major film franchises. TV development deals. The whole shootin' match.

Because this is top-quality writing, using the bones of the genre fleshed out in new and interesting ways. Psychological splatterpunk. Rez Noir. Gore with more.

And now the literary crowd is making "get-up-and-leave" noises. No, no! Sit down. This book isn't another exploitation of "Noble Savages Get Revenge Via Folklore" (seriously, go to Goodreads and search "the wendigo" to see what I mean about exploitation...monsterporn galore and white people writing from their deep personal knowledge of Native American life as far back as 1910). It is #OwnVoices do horror. The point of #OwnVoices is moot if it is construed by the very white people who celebrate it so vocally if it can't be applied to *sniff* mere genre fiction. (And for the record I'm all down with white people reading more Otherwork. I just find the labeling a bit depressing and not a little bit condescending. Do y'all really need roadmaps to find an interest in people who are-but-aren't like you?)

You are defined by the worst thing you've ever done. We all are. But what if the worst thing you've ever done offended not only the social norms and personal dignity of the community you live in, but the very powers of the Universe your community resides among? (There are different powers in every community...?) What the hell is wrong with you, first...you can't not know what you're doing is offensive when you are sneaking around...and second, when you're going against the Universal powers that little sick feeling in your gut should tell you to break the hell off, abort, and go back to where you were before. I speak from experience. As does our point-of-view character, Lewis. One of four buddies who need to get their freezers full before winter hunger attackes their families, these goofuses trespass on the Elders's land to bag an elk. They do that, alright, so strike one. It's a female, strike two. She's pregnant, strike three. The game police, the tribal councils, AND the Universal powers are all lined up to take turns beating up these criminals.

Yes, criminals. They violated laws and customs galore. But the law and the tribe are, in the end, the least of their worries. One of the lads is killed outside a bar, and that fact barely registers. It's a year or so after the perps committed their crime, but it doesn't feel like it's Retribution. It's sadly common for an Indian man to die violently outside a bar. So no alarm bells go off. Fast forward a decade or so, and Lewis begins to tell us of his slow realizations that Something Is Hinky in his life. His white wife (the epithet "Custer haired" is used and, sad old sexist that I am, that made me laugh out loud) starts to worry about his sanity...Lewis is pretty sure he doesn't have any for her to worry about...and slowly comes to think the crack-up she's experiencing vicariously is more than just the sudden onset of midlife dumbfuckery that almost all men go through.

The actions Lewis performs, and I use the term advisedly, all are geared to show his unseeable enemy that he sees her, he knows the pregnant she-elk and her calf are behind the escalating weirdness of his life even if his wife isn't figuring it out. His entrapment of a possessed workmate, and his subsequent means of dealing with her, is extremely and amazingly revolting, and exactly right: Can a sane man, which we've been building up to wondering if Lewis still is, do that?! And that's the point where a hack writer would just go on and show you his cards. Not so Author Stephen. Your suspense is not lifted. In fact, your suspense is not lifted any time soon.

Then along comes THE SHIFT. Suddenly we're in the elk-spirit's point of view. At first this disgruntled me. I wanted to know Lewis's fate! But in short order, events occurred that caused my attitude to switch back to trusting the author's structural capabilities. While the effect is jarring at first, I suspect that's actually the reason he does it. "Get out of that familiar, comfortable groove, Lazypager, and THINK about this story I am telling you!" When that shift, from passive experiencer to active reader, is accomplished, the story's outliers (Lewis's fellow perps) are served their just deserts in a way that merely toddling along behind Lewis would never have been able to accomplish. Now, there *is* a structural issue I have with the book, the long delay in the elk-spirit's getting revenge after her initial rage; and yes, Author Stephen does indeed provide a reason for it in the text but I find it a bit like a mea-exculpa instead of a reason. From my own point of view, it came across like an "oh SHIT I forgot about that!" add-on. It is a small thing, but pobody's nerfect and I have been yodeling my fool lungs out to convince y'all to get this book and do it NOW, so it's only fair to say it's not the beau ideal after all.

I'll warn you sensitive fleurs that the initial scenes of violence are not isolated events. I'm not going to go into their particulars. I will say this, passionate animal lovers should not even *think* about buying this book. The gore is not, however, ladled on the plate with the abandon of the cafeteria lady gravying your biscuits. It is where it is for solid structural and storytelling reasons. And, believe it or not, this genre trope...the threats to/from animals...is evergreen for a reason: we invest a lot of love in our companion animals, and we work off considerable rage at Life pursuing game animals. These are the two sides of the coin Author Stephen spends. Each, in its proper place inside this narrative, expands the reader's understanding of the true horror of this story. I could pepper this review with quotes from Author Stephen's wry, self-deprecating humor-laden writing, and it's a struggle for me not to, but there is one and only one quote I want you to take away from this inducement to buy and read this book for Halloween:


Death is too easy. Better to make every moment of the rest of a person’s life agony.