THE SHORTEST DAY, a quick hit of Irish magical realism from Colm Tóibín 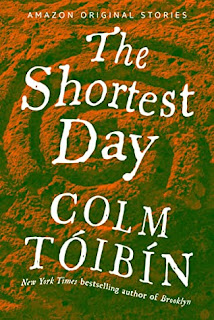 The Publisher Says: In Ireland, a man of reason is drawn to a true mystery older than the Pyramids and Stonehenge in this enthralling story about ethereal secrets by New York Times bestselling author Colm Tóibín.

During the winter solstice, on the shortest day and longest night of the year, the ancient burial chamber at Newgrange is empowered. Its mystifying source is a haunting tale told by locals.

Professor O’Kelly believes an archaeologist’s job is to make known only what can be proved. He is undeterred by ghost stories, idle speculation, and caution. Much to the chagrin of the living souls in County Meath. As well as those entombed in the sacred darkness of Newgrange itself. They’re determined to protect the secret of the light, guarded for more than five thousand years. And they know O’Kelly is coming for it.

I RECEIVED A DRC OF THIS STORY FROM THE PUBLISHER VIA NETGALLEY. THANK YOU.

My Review: I can't imagine too many people I know need to be told what and where Newgrange is. 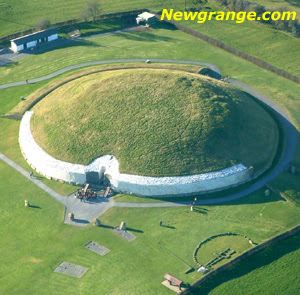 It is a stunning and majestic sight, though the location you see has been reconstructed...a fact whose advisability is, to put it mildly, debated in the archaeological community. No matter; here it is, here it stays, and good goddesses isn't it *spectacular*?!

The story Author Tóibín tells us is a simple one: a man of resolutely practical materialistic worldview is contemplating his imminent visit to Newgrange. It is almost Christmas, and in his deeply rooted preciseness of action, he has arranged to be gone *just* until Christmas Eve morning so as to, as always, spend his holidays with wife and children.

The Yule Solstice, a time of great power in Neolithic societies (if the number of archaeological sites with demonstrable connections to the Sun's position on that date is any evidence), has come to his attention as an important time at Newgrange as well. He feels duty bound, as the first archaeologist to possess this information, to investigate despite his unshakeable materialism:


The job of an archaeologist was to make known only what can be proved. The rest was idle speculation.

So two things are immediately apparent from this. First is that this is a story set in the past, as the site in its present state dates from after 1982 (see link beside the photo). Second is that there are those who know more than they have told about the site in the many years of Ireland's fussing about with it. That's very interesting....

As the tale is a short one, I don't want to give too much away. I am sure that the author's fans will, or already have, preordered the story. I know they won't want to know everything...but the story's best qualities are those that Author Tóibín uses in all his works, that remarkable ability to bring you with him as he astrally projects himeself (or whatever sorcery he actually does) into the worlds and eyes and minds of people perfectly real.

His gift is deployed on several strands. It makes me feel completely and happily immersed in the world he's created for them to enact this delightful confluence of streams of thought. It is a damn near perfect read for this wonderfully numinous time of year. Why, even Professor O'Kelly experiences an unaccustomed immanence while he is at Newgrange on the morning of the Solstice:


The professor was almost tempted to note that these people, if studied in the light of these designs on stone, knew something about what was palpable and also what was tangible: they knew about spirit, and they knew about line.
–and–
They must have loved the sun, or trusted it. They lured it down this corridor as though they were pulling it into the chamber by rope.

Even if it's just a hair too ungenerous with the Professor's character-building (that missing quarter-star explained), it is a delight and a worthy enhancement of your avoidance of the stressful events awaiting us on the third.