THE PURSUIT OF..., an interracial gay love story between an English aristocrat and a Revolutionary War Black soldier 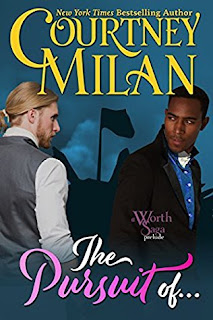 THE PURSUIT OF...
COURTNEY MILAN (The Worth Saga #2.5)
Self-published
$2.99 Kindle edition, available now
Rating: 4* of five
The Publisher Says: What do a Black American soldier, invalided out at Yorktown, and a white British officer who deserted his post have in common? Quite a bit, actually.
• They attempted to kill each other the first time they met.
• They're liable to try again at some point in the five-hundred mile journey that they're inexplicably sharing.
• They are not falling in love with each other.
• They are not falling in love with each other.
• They are… Oh, no.
The Pursuit Of… is about a love affair between two men and the Declaration of Independence. It’s a novella of around 38,000 words.
My Review: Courtney Milan has caused waves in the small, tightly-knit world of romantic fiction writers. Her relentless pursuit of a plagiarist, her #MeToo advocacy and personal, public acknowledgment of its relevance to her, and her battering down the racist gates kept within the Romance Writers of America, all conspire to make it close to inevitable that she would write this novella of men in love across multiple cultural barriers. In keeping with the norms of the genre, they live Happily Ever After...a thing few of us meatspace folk ever manage, but do we love to read about people who do!
Milan clerked for Justice Sandra Day O'Connor and Justice Anthony Kennedy, as well as on the Ninth Circuit Court of Appeal. Did you imagine that, with that kind of résumé, she would shy away from fighting the battle of queer representation in a field where it's been sorely lacking? It's true she isn't an #OwnVoices writer, but she is and always was an ally of the QUILTBAG community. So here she is, using her storytelling and her best-selling author star power, to make this novella of an English aristocrat and a freed Black Revolutionary soldier happen.
Lord Henry's long-tongued prattle gets him into boatloads of trouble, from before we meet him to the worst possible moment: he's a British aristocrat behind enemy lines, a man's been murdered, and he's in the wrongest place possible.
The more loquacious...possibly he's better described as "an oyster"...John, a Black freedman in the Rhode Island Regiment (real thing, Author Milan explains in her Author's Note), also in the wrong place at the wrong time, finds himself saddled with a redheaded enemy chatterbox for a five-hundred-mile WALK home to Rhode Island!
John trusts no white people (one finds it hard to blame him) and Henry, emotionally abused child of parents who ignored him, never met a stranger. Along this long walk they acquire and lose many things, including a cheese of truly repellent odor, flavor, and existence. This misbegotten milk product, ever riper and less appealing to the senses, grows more rank as Henry talks more and more sweetly, saving the men from trouble, managing to open his ever-more exasperated oyster's mind and heart, and generally making himself necessary to John's world.
For his own part, Henry's decided that John is everything he wants in life: quiet, proud, honorable, and deeply focused on the success of the Revolution that earned him his freedom. Henry needs to return home to England or risk being shot as a spy. John needs to reconnect with his own family. Parting is most definitely not sweet, but a great sorrow to them both; any 18th-century parting, let alone one that involved an ocean and warring nations, was as likely as not to be permanent.
It's a romance! You already now that's not The End. But the way they come back together was rushed, since this is a novella. I forgave it for that reason, and for the better reason that the men didn't compromise so much as accommodate each other's realities. It feels very good when people of true hearts come together, which is why romances exist at all. That this one features a color divide, a Revolution of one's country against the other's, and an inventive solution to the societal disapproval of gayness issue, all harmonized to make this a pleasurable read for me.
It is sex-free, so the eww-ick homophobes may enter this world without that sandbar awaiting them. At all. Ever. For $3, and with The Plague running us all through our TBRs at lightning speed, bookhorn this one in and see what the fuss is about.
Posted by Richard at 6:30 AM