THE DISAPPEARANCE OF ÉMILE ZOLA, a wrenchingly sad case of a man exiled from his home for daring to speak truth to power 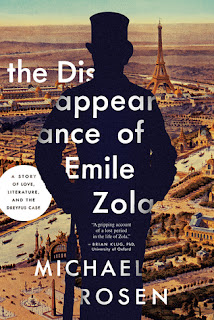 The Publisher Says: It is the evening of July 18, 1898, and the world-renowned novelist Émile Zola is on the run. His crime? Taking on the highest powers in the land with his open letter "J'accuse"—and losing. Forced to leave Paris with nothing but the clothes he is standing in and a nightshirt wrapped in newspaper, Zola flees to England with no idea when he will return.

This is the little-known story of Zola's time in exile. Rosen has traced Zola's footsteps from the Gare du Nord to London, examining the significance of this year. The Disappearance of Émile Zola offers an intriguing insight into the mind, the loves, and the politics of the great writer during this tumultuous era in his life.

I BORROWED THIS BOOK FROM MY LOCAL LIBRARY'S I.L.L. PROGRAM. THANK THEM BEST BY USING THEIR SERVICES OFTEN.

My Review: A very interesting digest of the paperwork, published sources, and private thoughts recorded between 13 January 1898 and Christmas 1900. The Dreyfus Affair's incredibly long shadow hasn't passed yet, though the anti-"foreigner" (Dreyfus was born a citizen) attitude of many of the French has shifted to the (also born citizens) Muslims. The rhetoric hasn't changed much.

Zola's response to the collective horror of his country's leaders...the men (all men, of course) charged with guiding the Ship of State into safe harbor, who listened to the lowest, the least, and the worst people in France and then gave them something they wanted...an Other to abominate and excoriate...was to scream his fury and rejection. These "leaders" then put the innocent-of-treason Dreyfus, that designated scapegoat to France's darkest impulses, onto a ship to die in their most horrifyingly ghastly prison colony. The baseness, the injustice, the inhumanity of it, ate at Zola like acid. He was the author of a multi-volume body of work called Les Rougon-Macquart, a daringly honest and searingly realistic 20-volume (!) cycle of tales about a clan of nothing-special French folk that earned Zola an international reputation for both talent and prurience. Reading them today, both seem reasonably accurate assessments.

So what, the guy's dead 118 years, the Dreyfus Affair happened 122 years ago.

Look around you. I would that we had a Zola to, in clear and direct prose, accuse the malefactors of our world of their crimes and, what's more, make the accusations stick. Would that it had been a lawyer named Mueller...I have kept hope alive that someone both could and would make a dent in the current administration's malfeasance. Now it looks as though there will be a coup attempt instead of a peaceful transfer of power! Hélas.

Rosen also includes translations of "Angelique," a "ghost story" that Zola wrote in London, as well as the stirring-if-stilted J'accuse! as it appeared in L'Aurore on 13 January 1898. If none of these events are familiar to you, go read this book immediately.

I'm stingy star-wise because Rosen's task includes the thankless one of framing his subject to people unfamiliar with the dramatis personae as well as the casus belli that got the whole thing going. As a result, he resorts to much inevitable spoon-feeding and that, I fear, caused my eyes to glaze over. It's necessary, it's even reasonably well-done, but it's bloody tedious and kept me from ever forgetting how Worthy the people were and how Relevant the warnings herein are. When my finger finds the overemphasis-via-shift key without being told to go there by my brain, we have a problem between us, Author Rosen.

Paradoxically, that makes me want all y'all to read this book all the more! The beauty of history is that we are able to view causes and effects in their entirety; a thing obviously impossible in the present. The tragedy of history is that those who don't read it don't learn from it; a thing that could prevent the present from repeating the past verbatim. I will say this: When you read this book, you will not feel like you're being told to keep chewing that wad of kale until it goes down your throat. More along the lines of, "here's some lovely dark bread to sustain you, love, and a big pat of real butter for yummies."