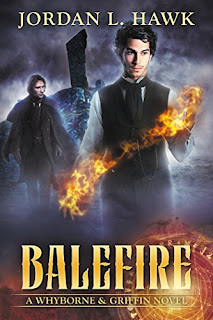 The Publisher Says: Whyborne’s Endicott relatives have returned to collect on the promise he made to help them take back their ancestral manor from an evil cult. In exchange, they’ll give him the key to deciphering the Wisborg Codex, which Whyborne needs to learn how to stop the masters.

To that end, Whyborne, his husband Griffin, and their friends Iskander and Christine travel to a small island off the coast of Cornwall. But when they arrive at Balefire Manor, Whyborne must not only face the evil within the ancient mansion, but the painful truth about his own destiny.

DON'T TAKE THE WORLD BACK TO A TIME WHEN MEN AND WOMEN HAD TO HIDE THEIR LOVE. KEEP THE MONSTERS FICTIONAL FROM NOW ON.

My Review: That, my chick-a-biddies, was a hellacious ride! More after I have knit the ravel'd sleave of care with some z's.

The next-to-last entry in this long-running series. The idea makes me a bit sad, but really when I think about it, this is a great time to go out: The ultimate threat to the humanity of Terra is about to rip its way through the veil of ignorance that traps us cattle in this vale of tears and kick-ass.

Not if Dr. Percival Endicott Whyborne, tall geeky sorcerer, and his dearly belovèd husband the ex-Pinkerton Griffin Flaherty, have a tiny tiny thread of the hope of a chance, they aren't.

This is something I treasure about reading these books: The superhero who's saving the world for the Great Unwashed is a gay goofus with the social skills of a teenager and no reason whatsoever to do the job he's doing. The world of Widdershins, Gilded Age America, hates fags. He's never been anything resembling straight. And *still* he saves the world the ungrateful jackasses infest with their seething rage at his audacity to claim love and happiness with another wounded survivor of straight people's hate.

You can have all those lushly muscled Captain What's-its and bounteously bosomed -womans and -girls. I'll take lanky, cranky, and awkward Whyborne every damn time. It matters to see yourself, the best part of yourself hopefully but yourself, in the tropes that dominate the age you live in. I myownself glory in this:


The creature was a blot on the world, a living darkness spreading corruption to everything it touched. Where {Whyborne} burned with pure, cleansing fire, it smeared a layer of sooty foulness across the very fabric of reality. It was every shape and none, a heaving, churning distortion that gave my shadowsight nothing to rest upon.

When Whyborne is done making the world safe for the people who want to make his world unsafe, he goes to his beloved Griffin (who is speaking in the above quote) for comfort and joy. And yes, that means sex. Usually two or three steamy scenes. I feel like y'all heterosexuals should be made to read some of our sex scenes since yours are flippin' EVERYWHERE and y'all think (often out loud) that we should just belt the eff up and watch/read/encounter them because they're normal.

Common, perhaps; not normal. Normal is an individual calibration to the world.

If this book held a disappointment for me, it was the one-and-only intimate scene between Whyborne and Griffin. I get it; this is a hectic book with multiple battles being fought; but damn. One little bitty round of easy-to-clean spoodging smacks of adolescent exploration, not two men in their 30s expressing their established and ongoing desire for each other.

And then I remember the stakes looming over the men....

Yeah, pretty much the only thing you could squeeze in, eh what, Author Hawk? Book 11 can't come soon enough and I don't ever want to see it because it's the last and how dare you not keep writing these delicious stories and yeah, it's time to let these poor bastards rest.

No, I'm not conflicted at all. Why do you ask?