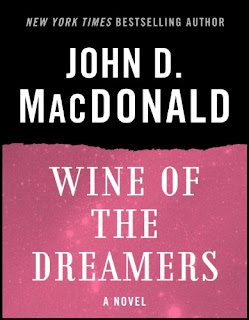 Rating: 3 and a half surprised stars of five

The Publisher Says: Wine of the Dreamers, a classic science fiction novel from John D. MacDonald, the beloved author of Cape Fear and the Travis McGee series, is now available as an eBook.

They are the Watchers: pale laboratory creatures living in a remote, sealed-off world. Their game, their religion, their release is to dream, and their dreams carry across the galaxy to lodge in the minds of the inhabitants of another world: the planet Earth. But as the human race approaches a dream of their own—traveling beyond their own planet to other worlds—the Watchers step in. For escape from Earth is an impossible dream, one that the Watchers will go to any length to destroy.

Well blow me down and call me Shorty! I would never, ever in a month of Sundays have guessed that Travis McGee's daddy ventured into outer space! But he did, and I have now passed its odd and lumpy lineaments before my eyes.

I poke around the Internet when I'm at a loose end. I found a Wikipedia article on Startling Stories, a pulp rag from the Golden Age of SF. Oooh, lookee here, what innocent things the ancestors were, I thought, and oooh how scrummy there's a link to an internet archive of the magazines!

Downloaded and read. And what a ride it was: Square-jawed hetero male has non-rapey friendship with bodacious curvy babe. Not at all like the MacDonald we know and love. (Or don't love, as the case may be.) This is an aberration, explained by a plot twist in the story of the Dreamers. Now this is an old chestnut, the mental passengers who suddenly take over innocent earthlings for malign purposes. It wasn't the latest thing in 1950 (!!) when the story appeared in Startling Stories. But it's an evergreen for a reason, it explains the strange turns and periodic about-faces that humans actually do have. There was a moment when I thought, "aha this explains Parseltongue!" before I realized JK Rowling's younger than I am and not known to be related to MacDonald...the only means I can imagine whereby the Scottish lassie would've heard of this obscure gem. But at an even greater remove in time (I found this story in 2014), the metaphor for the evil Dreamers being or neoliberal overlords leapt forcefully to my mind.

In more or less 50,000 words, MacDonald hit all the buttons of an action adventure on multiple planets, America's inevitable domination of the Space Race, and that eternal favorite of male readers, Man's Unique Destiny to Rule and Dominate! It was 1950, go fight the odds. It rings more hollow seventy years on than ever, given the state of climate change and the unending wretchedness of the pandemic.

As I scrolled through the accursèd PDF file, I was increasingly amazed at the un-MacDonald-ness of the story. His touch with a wisecrack was entirely absent, his trademark pessimism was not yet at full cry as the ending was hopeful (!), and while I would not put MacDonald up there with Henry James in the ability to convey character in a few well-chosen words, these folks were Central Casting call sheets.

So it was that, despite the siren call of sleep, I scrolled and scrolled through the scanned pages of this deeply forgotten footnote to the popular career of MacDonald. It was certainly MacDonaldy in the sense that, despite the humorously outdated science, and despite the hoary familiar tropes being unspooled before me, I couldn't think of a good reason not to keep right on reading until the inevitable ending. And by inevitable, I mean so clearly telegraphed in the set-up that Helen Keller running out of a burning building wouldn't have any trouble supplying it for you.

In fact, would I recommend starting this little marvy to most people? No, not really, it's not earth-shatteringly good at anything. It's a curiosity, and a charmingly old-fashioned stroll down memory lane for those of us on the downhill slide to death. You can always download it free with a modest amount of effort if Halloween seems like the right time to think about the dear, dead past's quiet little corners.