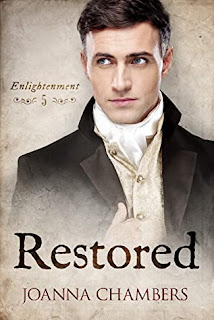 The Publisher Says: Eighteen years ago, Henry Asquith, Duke of Avesbury had to leave his kept lover, Kit Redford, in order to devote himself to raising his young family. Now, a lifetime later, his children are moving on and for the first time in years, Henry is alone.

During a rare visit to London, Henry unexpectedly happens upon an old friend of Kit’s and learns that Kit did not receive the financial pay off he was entitled to when Henry left him. Instead Kit was thrown out of his home and left destitute. Horrified, Henry begs Kit to see him and allow Henry to compensate him. But Kit, who now owns a discreet club for gentlemen of a certain persuasion, neither needs nor wants Henry’s money.

“Perhaps you should earn the money you owe me the way I had to earn it? On your knees, and on your back, taking my cock like a whore.”

Kit thought he had put his old hurts and grievances about Henry behind him, but when he sees Henry again, he discovers that, not only is the old pain still there, so is the fierce attraction that once burned between them. When, in a moment of fury, Kit demands a scandalous form of penance from Henry, no one is more surprised than Kit when Henry agrees to pay it.

As Kit and Henry spend more time together, they learn more about the men they have become, and about the secret feelings and desires they concealed from one another in the past.

Henry realises he wants to build a future with Kit but can he persuade his wary lover to trust him ever again? And can two men from such different worlds make a new life together?

I RECEIVED A DRC OF THIS TITLE FROM THE AUTHOR. NOW I MUST SAVAGE IT TO PROVE I CAN NOT BE BOUGHT.

My Review: I am much closer to seventy than I am to fifty. As hard as that fact is to swallow...Alanis Morissette and her bloody "Jagged Little Pill" begone!...it is the truth. And a corollary of that truth is that one becomes pretty much invisible at this age. My Young Gentleman Caller, unwilling to lie to my face, spins it as his insurance policy: Pretty young things don't look at me, so he doesn't have to stalk them with murderous intent!

I might be an old bastard, but I'm a *lucky* old bastard. And here I am bragging about it to the world. It feels right to do that in a review of Restored, though, because while neither of the heroes (they are indeed heroes) are anything like as old as I am, they're old for their time (fifty was elderly in Regency times, and Henry's forty-seven) and not slowing down a bit. Henry, Duke of Avesbury, and Christopher Redford shared a passion as young men and, after two decades, find each other and wonderingly work their way through a shared past that never went as either would've wanted it to.

Gawddam, it feels so fucking good to read something Romance-wise that mirrors so many of my own experiences being an old crock!

That's really it, and I ought to belt up and go have some hot milk and toast for my supper, but there is quite a bit to say yet. Henry's companionable marriage ended in tragedy, the death of his young wife. She was his friend; not long after the birth of their fourth child, she revealed her extreme dislike of sex and her unwillingness to bear more children. She was kind and sensible about it, giving Henry complete freedom to meet his needs; that is, so long as he was merely working off his lurid energies, not threatening her position as wife.

Enter (!) Christopher Redford, Kept Boy. The heart (as adults all know to their cost) isn't likely to listen to sensible, reasonable rules, and Henry finds himself approaching a cliff...then his wife throws her imminent mortality into the mix, makes him swear to "put away his toys" (ie leave his belovèd Christopher) in a really denigrating, unkind, and harshly judgmental way. But she's the Wife. Must be obeyed.

And that should've been that.

Was that, for most of two decades. Then Henry, in London from Wiltshire (is that a real place? I knew a guy whose last name was that once), sees a face from his misspent youth while meeting his pregnant daughter for tea. The memories he's never been able to fully repress, the longing for his lost love Christopher, all make the Duke of Avesbury venture to approach their old mutual acquaintance (one of Christopher's fellow courtesans) and beg news of him.

Well. Cat, pigeons, among. Kit, as he is now known, wasn't treated fairly in spite of Henry's very explicit and specific instructions to the contrary. There has been a long, resentful silence on both parts not because either man wanted it that way, but because someone else entirely took it upon himself to interfere. Naturally, neither ever knew this; and each has his lifetime of hurts to hide behind when they see the one face that will always make them smile. But knowing that one still loves is not at all the same as being in that wild, passionate "what, me worry?" zeal-of-the-organs stage of life. Older might not equal wiser, but it sure as shootin' equals warier.

As Kit and Henry circle each other, feinting at presumed weak spots and finding them yielding; shoving back, only to fall and need help up, always willingly, unstintingly given; each needs so badly to protect their loved ones, in fact so much so that they each forget to love back the important one-and-only they have the chance to make their own again. Not for long, though, since they're both in a phase of life where changes are coming ready or not. No one stops the clock.

What matters is what you do with your time, not what time has done to you. Changes? Yes; can, in fact, two scarred and mangled lovers find a new love?

Oh, as to that savaging: Author Chambers has revolted and appalled me. I am foully treated by the refusal, against all possible good taste or common sense, of the Romance Writing Academy to ban outright and for all time the vile, repellent, unnecessary, and lazily unworthy w-bomb from use.

And really? Tom? C'mon. That needed a bigger set-up. *tsk*