BEYOND BEDLAM, a condensed sprawling novel of a novella that needs rediscovery 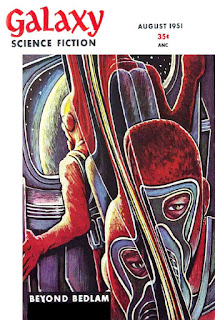 BEYOND BEDLAM
WYMAN GUIN
Project Gutenberg Free; reprint of original Galaxy Magazine publication, August 1951 Rating: 4.5* of five The Book Report: (adapted from The Science Fiction Encyclopedia)
A brilliant novelette describing an Earth about a thousand years hence where Drugs enforce a strictly regulated schizophrenia in every human being in a five-days-on, five-days-off routine, each body inhabited alternately by two personalities. The balance created between the two personalities' divergent aspects ends up serving to nullify Humanity's subconscious aggressions, thus eliminating the "paranoid wars" of the "ancient Moderns" aka "us." But passion and art likewise disappear. The good and evil of this system are explored with a literacy and verisimilitude that make it a startling, propulsively readable and interesting variation on Aldous Huxley's vision of drug-enforced stability in Brave New World. My Review: This antique survivor of the post-war optimism about advances in medicine and psychology takes a radical turn on the medicate-me-well paradigm. Very unusual to read a story that celebrates schizophrenia as the savior of humanity, as the road out of the Mutually Assured Destruction deterrent days. I learned of this story's existence via James W. Harris's blog, Classics of Science Fiction, and I seem to have liked it just a bit more than he did. Author Wyman Guin was certainly a man you'd trust to tell this story of a future, beautifully functional schizophrenic society balanced into cultural stasis by lifelong usage of psychoactive drugs. He was a Big Pharma man as his career, and so uniquely well placed to create a story of hyperalters and hypoalters (dominant and recessive personality traits) cohabiting in the same brain. Of course there is no story in a happy, smoothly functioning world. Something must go pear-shaped, and in this instance it's the emergence of a man's love for a completely, utterly forbidden-to-him woman. The wife of the one person he absolutely can not get away with cuckolding. His hypoalter. Bill Walden, bookish and genius-level smart, has a wife (there clearly is no room for queer folk in Guin's future) and a child. All three of them are hyperalters, the different bodies' dominant personalities. He isn't getting much deeply drug-addled emotional juice from the wife, and simply cares nothing for the child. He somehow decides his hypoalter's wife (who is his own wife's hypoalter) is The One. She agrees, naturally, and they embark on the Grand Passion journey that absolutely never ends in sunshine, lollipops, and rainbows.

They needed each other as each had been, before fear had bleached their feeling to white bones of desperation.

(This is why affairs always end badly, or turn into replacement primary relationships, or not infrequently both.) This outcome being their world's major promise to its schizophrenic folk, there is a power structure...the Medicorps...with dictatorial powers and uberinvasive surveillance monitoring the individuals in each body, assuring that they are all in medical compliance or else. The Medicops (don't you just love this idea? The Medicops! What a donnybrook that concept would start in 2020 Merica!) are arbiters of the thousand-year peace that "Better Living Through Chemistry" as a social system has enabled (enforced) at very, very significant cost. That cost being in the rather distant past, the ancient "Moderns" of the 20th and 21st centuries, Bill and his fellows are truly well-established in a working, stable, functionally fulfilling society. But here's Bill Walden, in love with Forbidden Fruit. Human beings will not just stop being the chaos vectors we started out to be. So Bill, as a tragic hero must, sows the seeds of his downfall...not the wife-shagging part that unglues the armature, but the neglected and unloved child. Out of the mouths of babes comes truth, and that is almost never a good thing for adults. In this case it's a gigantic chaotic reckoning of the transgressors, the victims, and the entire model of the society that has held sway on Earth for most of a thousand peaceful, unwartorn years. All it took to create it was the suppression (however partially successful, however massively destructive) of human nature by drugs. Listen, I'm not ever going to complain about psych drugs. Anti-depressants literally saved my life after a suicidal break six years ago; months and months in a locked hospital ward being treated with psych meds enabled me to put myself back together, and here I am. I will say that, as this story came out in 1951, the drugs I took were but fantasies to the doctors of the day. So the idea central to the story, that pharmacology could fix psychological problems, is even more believable now than it was then. Yes, there are many who rail against medicalizing psychological issues. I won't get into that debate; but I'll point out that dead people don't use many psychological services and there would be more dead people (me, for one) without the help the drugs can be. Another strand of this story that resonates strongly today is the Medicorps. We're in a pandemic where people are refusing to follow the informed and reasonable plans made by educated subject-matter experts. In the story, this issue was explicitly dealt with in a kind of flashback sequence. I approved. Since the ebook is free and short enough to read in an afternoon, maybe you'll take a look and see if you do as well. Like all Utopias, especially medicalized ones like this and Brave New World, there is a repressive government in charge of everything. Unlike Brave New World, there is no pocket of defiantly Other people. The simple truth is that no human being believes we can be trusted to run our own lives in such a way as to minimize conflict with other human beings. I know I don't. But the yearning for freedom, for unfettered experiences, is powerful and motivates many of our species' most enduring creations. For good and ill, of course. Like the drugs that accidentally harmonize the formerly disabling condition of schizophrenia into the basis of a stable society. The drugs that were invented led to a centuries-long breeding program resulting in humans with two and only two personalities. The social structure, rigid of course, built on this discovered binary has a lot of tech backing it up, like the drugs designed to enhance, enforce even, the bifurcation of the hyperalters and hypoalters into separate and un-overlapping lives. In a 21st century where we have fMRI and CAT and PET scanning technologies, the dénouement of this piece is a lot more believable than it was in 1951. Like all humans, Bill wants to be his unmediated self. But in a society where everyone is a binary, sharing bodies and faces, what keeps confusion from reigning supreme? Of course there is a shift-based apartheid system to ensure minimal social overlap of hypers and hypos; as the hypers are the dominant personalities, the hypos are waging a cultural battle to retire those denigratory terminologies:

Those idealists—they were almost all hypoalters, of course—who wanted the old terminology changed didn't take {the stability of society} into account. Next thing they'd want children to live with their actual parents!

But the system has more elaborate ploys! Makeup, for one: Everyone wears it; everyone is ashamed to be seen without it; and in cases like Bill's, where he has anti-socially "forced a shift" on his hypoalter to spend time with the man's wife, wearing the alter's makeup and clothing is repugnant to the other, socially conditioned to see that other as unreachable.

She pulled the sheet tighter about her and said icily, "I will not wear that woman's clothes." ... {Bill} shifted! He left me with...Oh, I'm so ashamed!" There was no way to escape the conditioning of childhood—sex relations between hyperalter and hypoalter were more than outlawed, they were in themselves disgusting.

There is a lot more depth to this world than can possibly be contained in the under-100 pages of the written tale. No sequel or other work was ever written in the man's lifetime, nor was this story ever filmed (as best I can tell). And that, my friends, is a damned shame. This would be a *superb* movie, with big names and lush effects and a biting wit to the screenplay. It could even be a terrific little morality tale for the present climate of fear and distrust of Experts. Does anyone here know how to reach Ryan Reynolds? He'd be *awesome* as Bill!
Posted by Richard at 6:30 AM