MAMMOTHS OF THE GREAT PLAINS, underknown alternate history of modern America with mammoths 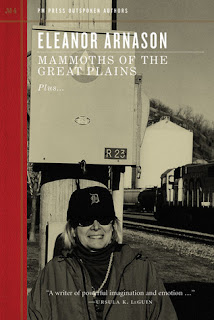 The Publisher Says: Shaggy herds of mammoths still roam the Great Plains—to the delight of President Thomas Jefferson—in this imaginative alternative history in which the beasts thunder over the grasslands as living symbols of the oncoming struggle between the Native peoples and the European invaders. This unforgettable saga soars from the Badlands of the Dakota Territory to the icy wastes of Siberia, from the Russian Revolution to the American Indian Movement protests of the 1960s and one woman’s attempt to harness DNA science to fulfill the ancient promises of her Lakota heritage. In addition, this volume includes the essay “Writing During World War Three,” a politically incorrect take on multiculturalism from a science fiction point of view and an outspoken interview with the writer of some of today’s edgiest and most uncompromising speculative fiction.

My Review: Honestly, I think I should simply put this in front of you:


"The thing your teachers may not have told you is how full of hope the late '60s were. Yes, there was violence. The police and FBI and Natiional Guard were dangerous. Plenty of people—good people—died in fishy ways; and plenty went to prison for things they almost certainly did not do. But the times were changing, and many of us thought we were building a new world in the shell of the old. As it turned out, we were wrong, at least for the time being. The '60s wound down slowly through the '70s, and in 1980 Ronald Reagan began a long period of reaction."

...issue an apology for my entire generation for allowing the calamity that was Reagan's rule, and go quietly away. In fact, I suspect many (some even related to me) would like that a lot. So I won't do it.

Emma, biracial daughter of an Indian woman and a man from the Ivory Coast, leaves Minneapolis to visit her grandmother on the Standing Rock resevation in Western North Dakota. The child is riding the train, she sees things on her trip that clue us in to the fact that she's not living in *our* 21st century, like...well...mammoths.

Mammoths. Mammoth Bill Cody. Mammoth spirits in a woman's dream. An entire history of mammoths in the 19th-century west, starting with the delight of President Thomas Jefferson at Meriwether Lewis's gift of a tusk. Okay...I'll bite...how's this one come about, playin' out? Why wasn't Reagan and his horrorshow administration butterflied away by this weird development? But sit back, I told myself, listen and learn. Be like Emma, the patient city-child absorbing the world from her Native American elder. Not least like the patient, abused, angry Native people white people have stuffed onto lands that can't support them in order not to have to kill them outright.

Emma listens to her grandmother speak of the grandmother who raised her, Rosa the white-inside middle-class matron whose life was dedicated to preserving the maximum amount of tissue from the last living mammoths on the planet. Her struggles, adventures, all the stories she kept in her heart while she went to white schools, white universities, teaching white college students a continent away from the grandmother who was always there for her. Emma has to learn, of course, but these are big lessons, not easily absorbed at any age. We, the readers, know how much of this will come back to her one day...but now Emma's got to learn the hardest truth as her grandmother describes, in detail, the end of her early adulthood at her own grandmother's death. She has a house...but it comes at a price: The mammoth tissues her grandmother treated so very carefully need tending. A trap, thinks Emma's grandmother resentfully:


"'Are you sure you are Indian spirits? You know a lot about biology.'

"'First of all,' the crone said, 'we are in your dream. Obviously, we know what you know. And we, like you, are at the end of the 20th century. White people have a god who exists outside time and history and pays far too little attention to his creatures' misbehavior, in my opinion.

"'Indian spirits live in the world we helped make. Why not? We did good work! It's a good place! And like people of every kind—the two legs and four legs, birds and fish and insects—we change in response to time and events. Don't expect us to be like the spirits in an anthropology textbook.'

"That was the last thing the women said to me. I think they turned into mammoths, and the house vanished...Maybe I made everything up. I have never been certain about dreams, Emma, though many other people are, and I respect their opinions."

You can't just throw the past away without serious consequences, Emma. I hope and pray you remember that.

Much compressed storytelling feels rushed, or slighted; Author Arnason is a master of the art of compressing without disappointing. As Emma's grandmother tells her story, it feels organic that some things don't quite get the attention one would want them to as a reader. A kid's got a limited capacity to *get* adulthood; Emma's getting socked with a lot; but her gentle, loving grandmother is giving her roots to grow better wings. Of course the story gets less fully detailed as the long single sitting goes on. But equally "of course" is the fact that there is a point, a purpose, if one wants to be gross about it, a lesson for Emma in this tale of the women in her lineage:


"History is a collaborative process. The important thing is to be a part of history on the right side, which is not always easy to determine. It's not enough to hold onto the past, though we Indians proved that losing the past is dangerous. We almost died trying to be white. Not that white people have done much better. They almost destroyed the planet by getting and spending and laying waste.

"What do we keep from the past? What do we discard? How do we change? These are all important questions, which all of us have to answer. ... There's plenty left to do to remake the planet, but we have achieved a fair amount already. One step forward and two steps back, then two or three steps forward. We dance into the future like dancers in a Grand Entry."

We do that dance forever, or for as long as we are allowed. We all rely on that dance, and rely on the dancers to know where to move and when to move away. And, sadly, unlike Emma's grandmother and her world, it seems as though we're lacking in the mammoth-sense to right past wrongs.


Writing Science Fiction During World War Three reminded me, in its footnotes, of the succinct formulation popularized as Hanlon's Razor: "Never attribute to malice that which can be adequately explained by stupidity."

Anyway. Author Arnason last updated this essay more than a decade ago, for this volume, and of necessity many of the decade's disasters go unremarked. Her blog (linked at the top of this post with her name) hasn't been updated regularly since 2018, though there is no doubt that she was alive and kicking on 12 May 20, so that's a tidbit of good information. The burden of her refrain is so in tune with mine: Capitalism is dying, the next thirty-five or so years are so incredibly crucially important to what comes next for us as a nation, society, species even (climate change is real, happening, and do not think it's going to be easy to deal with) that we must all link arms and march again and again and again.


"At the Edge of the Future": Eleanor Arnason Interviewed by Terry Bisson is a twenty-five page Q&A between the two, in which Arnason details her extremely odd and interesting childhood, her inevitable student rebellion (not so tacitly supported by dear old mom and dad), and her path to becoming one of the SF field's few working woman writers with her own career...that is, not one that supported her, but rather one that happened on her own terms, following her own interests. She was, as a result, the winner of the inaugural Tiptree Award (now called the Otherwise Award, which Arnason expressed deeply mixed feelings about) for her novel A Woman of the Iron People, q.v.

It was a delight to spend a day in Author Arnason's good company. I recommend the experience.