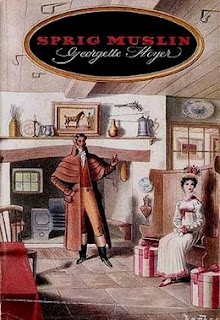 The Publisher Says: Finding so young and pretty a girl as Amanda wandering unattended, Sir Gareth Ludlow knows it is his duty as a man of honour to restore her to her family. But it is to prove no easy task for the Corinthian. His captive in spring muslin has more than her rapturous good looks and bandboxes to aid her - she is also possessed of a runaway imagination...

A typically enthralling historical novel, Sprig Muslin shows the skill which has kept Georgette Heyer a huge and devoted readership to this day.

This is an entry in the 1956 Club group of reviews.

My Review: I confess it true: I am such a noddycock that this is the first of the estimable Miss Heyer's trashy novels that I e'er did peruse. Dash it all, how was I to know she was a veritable caryatid of culture, a purveyoress of fine wordsmithing, an artiste?

Yeah, so she invented the Regency romance, or close enough to it. Yeah, she was an English homemaker. And by today's "so what did you smell like after you murdered those teenagers, Mr. Dahmer?" celebrity standards, she was a complete nonentity. Never gave an interview, never went on tour, never so much as blew a kiss to a crowd.

And still her legend lives on. I imagine the Regency period of English history would still be a giant snorefest for the youth of America if it were not for Miss Heyer's Regency-set romances. They spawned myriad imitatrixes to mine the rich seam, from the time she started out at age nineteen until this good day. And beyond, I suspect. She wrote well over 50 titles, she had a half-century career, she was a commercial powerhouse. She was a game-changer for the publishing industry. She was, in short, JRR Tolkien but female (and fun to read).

What you will see is simple, direct, and graceful writing, not precious or cutesy-poo drivel. You will see implausible-but-consistent plotting. You will see clearly and concisely drawn characters, people one can believe really went to Almack's and faught in the Peninsular campaign and made their debuts to the ton. You will, if you climb down off your preconceived notions, get a rare treat...a book that's a pleasure to read and a disappointment to finish, but is just exactly the right length.

Yes yes yes, regressive social attitudes, emphasis on male privilege (even while the females are scheming to use the men to their own advantage, the minxes), society = Society and the Lower Orders in their place...if those givens are not to your taste, why are you reading a Regency-set romantic fiction? Still less one published in 1956. Really, don't. One isn't required to attend every fight to which one is invited.

That said I found the rising-forty hero falling in love with the seventeen-year-old heroine a bit rich for my blood, hence the not-quite-four-star rating. All of Heyer's romances are good, some are excellent; this is good(ish) and it's got that spark of wry wit that can, at times, become cruel in Heyer's hands. The Chicklaids, in this book, skate close to the snark line, uncomfortably so; it seems almost no thought was given to the way they're slotted into the plot to serve. But it's a cavil. Minor characters seldom get the fine brush. But Heyer, gifted quite beyond the ordinary, can and has done better, less lorgnette-goggling minor characters.

All that notwithstanding: Recommended. Most heartily. Damme if it's not.