THE BEAUTIFUL THINGS THAT HEAVEN BEARS, a beautifully written book from the Aughties 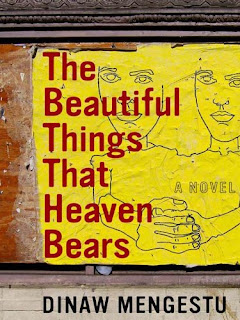 The Publisher Says: Seventeen years ago, Sepha Stephanos fled the Ethiopian Revolution after witnessing soldiers beat his father to the point of certain death, selling off his parents' jewelry to pay for passage to the United States. Now he finds himself running a grocery store in a poor African-American neighborhood in Washington, D.C. His only companions are two fellow African immigrants who share his feelings of frustration with and bitter nostalgia for their home continent. He realizes that his life has turned out completely different and far more isolated from the one he had imagined for himself years ago.

Soon Sepha's neighborhood begins to change. Hope comes in the form of new neighbors—Judith and Naomi, a white woman and her biracial daughter—who become his friends and remind him of what having a family is like for the first time in years. But when the neighborhood's newfound calm is disturbed by a series of racial incidents, Sepha may lose everything all over again.

Told in a haunting and powerful first-person narration that casts the streets of Washington, D.C., and Addis Ababa through Sepha's eyes, The Beautiful Things That Heaven Bears is a deeply affecting and unforgettable debut novel about what it means to lose a family and a country-and what it takes to create a new home.

Published as The Beautiful Thing That Heaven Bears in the USA, Canada and Australia; and as Children of the Revolution in the UK. Winner of the Guardian First Book Award for 2007.

IMMIGRANTS LIKE AUTHOR MENGESTU ARE WAITING FOR PERMISSION TO STAY IN THE US RIGHT NOW. REMEMBER THIS WHEN YOU CAST YOUR VOTE.

My Review: How wonderful it is to find a first novel that feels so accomplished and tells such an engrossing story. I can't imagine that real, enjoyable talent is becoming rarer in a world that contains such eloquent proofs of its health. I can, and do, believe that unfounded and unrealistic fears of immigrants are preventing many of the world's as-yet unidentified talented folks from seeking safety that will enable them to create and contribute to the world.

Mengestu tells the story of three friends, African immigrants all, who meet in Washington DC, for so long the home territory of nativist sentiment in our republic of exclusion. I don't think a recap of the plot will help anyone decide whether or not to buy the book, because its outlines are simple: Men seeking material success in the motherland of same are thwarted and, through effort and good fortune, succeed at things they weren't looking to succeed at...temporarily.

A fire plays a major role in completing the story, and since I am currently seeing a fireman, that caught my eye. It's not, to my surprise, used as a pat plot device, but imbued with a real sense of the inevitability of sadness, loss, and change in the entwined lives of three lovely characters. Naomi, to name but one, is a heartbreakingly well observed actor in the piece despite her tender years, and Judith her mother is such a deftly drawn, conflicted, real person that I was tempted to look her up in the phone book; as for Sepha, he can come stay with me until things get better. That's the kind of connection Mengestu's characters call forth in me, and I hope in you too.