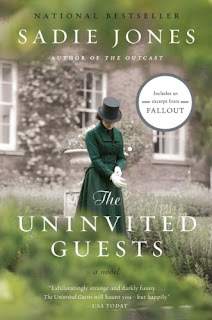 The Publisher Says: One late spring evening in 1912, in the kitchens at Sterne, preparations begin for an elegant supper party in honor of Emerald Torrington's twentieth birthday. But only a few miles away, a dreadful accident propels a crowd of mysterious and not altogether savory survivors to seek shelter at the ramshackle manor—and the household is thrown into confusion and mischief.

The cook toils over mock turtle soup and a chocolate cake covered with green sugar roses, which the hungry band of visitors is not invited to taste. But nothing, it seems, will go according to plan. As the passengers wearily search for rest, the house undergoes a strange transformation. One of their number (who is most definitely not a gentleman) makes it his business to join the birthday revels.

Evening turns to stormy night, and a most unpleasant parlor game threatens to blow respectability to smithereens: Smudge Torrington, the wayward youngest daughter of the house, decides that this is the perfect moment for her Great Undertaking.

The Uninvited Guests is the bewitching new novel from the critically acclaimed Sadie Jones. The prizewinning author triumphs in this frightening yet delicious drama of dark surprises—where social codes are uprooted and desire daringly trumps propriety—and all is alight with Edwardian wit and opulence.

My Review: Emerald Torrington turns twenty today. Her shabby-genteel mama Charlotte, bratty brother Clovis, and afterthought baby sister Smudge, née Imogen, are celebrating with a dinner party, to include Emerald's old friend Insignificance, née Patience, and her brother Ernest; and a last-minute addition, rich local businessman John Buchanan. Charlotte is hoping John will marry Emerald, who Does Not Fancy him and wastes no time letting him know this; he responds by laughing at her arrogance (go John!), yet he still gives her a beautiful cameo as a birthday gift, and still feels...well.

The the Railway wishes upon the family an entire carriage-load of strangers due to an accident which occurred on the branch line. Florence, the housekeeper tasked with keeping house and making a party with one maid who's time is in demand as a hairdresser-cum-lady's-maid for all the abovestairs women, fetches them tea and then the whole household, and invited guests, forget about them.

Except Charlie. Charlie, from First Class unlike the ragtag and bobtail who arrived before him, moves right on in to the birthday party, with surprising...shocking, in fact...results.

Some guests are more uninvited than others. Poor Emerald...such a decent sort trapped in that last moment of adolescent intolerability and intolerance. Well...not any more.

Three stars? Does that seem a bit mingy? It isn't. I'll tell you why.

What begins as a species of Edwardian-style Heyeresque silliness turns into The Turn of the Screw, and for no really good reason. It's nicely written, being a Sadie Jones novel, and it's plotted with some care, but the mash-up takes a lot of suspension of disbelief and it's not asked of one until too late in the game. I don't think of myself as an inattentive or oblivious reader. No adequate set-up was done for the surprise twist, and so instead of feeling excited and pleased, I felt slightly seasick at the sudden change of direction as the boat, previously making for a harbor I could see miles away, goes across the waves' direction towards a more distant island.

Surprise me, yes; do a hard one-eighty, and you risk making me feel duped instead of pleasantly surprised. And that is where The Uninvited Guests left me. Looking for clues as to why I ended up in Calais when my ticket says Southampton.