This review also appeared at The Oak Wheel. 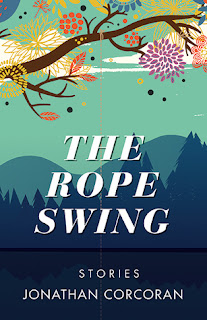 The Publisher Says: A once-booming West Virginia rail town no longer has a working train. The residents left behind in this tiny hamlet look to the mountains that surround them on all sides: The outside world encroaches, and the buildings of the gilded past seem to crumble more every day.

These are the stories of outsiders—the down and out. What happens to the young boy whose burgeoning sexuality pushes him to the edge of the forest to explore what might be love with another boy? What happens when one lost soul finally makes it to New York City, yet the reminders of his past life are omnipresent? What happens when an old woman struggles to find a purpose and reinvent herself after decades of living in the shadow of her platonic life partner? What happens to those who dare to live their lives outside of the strict confines of the town’s traditional and regimented ways?

The characters in The Rope Swing—gay and straight alike—yearn for that which seems so close but impossibly far, the world over the jagged peaks of the mountains.

My Review: As a whole, this collection deserves possibly more than four stars, but I couldn't get past a feeling of distance that prevented me from becoming fully wrapped up in the life of this West Virginia town. No less a luminary than Jayne Anne Phillips (Lark and Termite remains a favorite of mine years after reading it) praises Corcoran's work. He even got a laudatory review from KIRKUS! I hope his life partner had that embedded in lucite.

As is my habit with collections, I'll go story by story and give some opinions on each:

Appalachian Swan Song sets the tone for this collection of loosely interlinked collection of vignettes limning the decline and death of a small West Virginia town whose economic purpose has been served, so it is cut adrift by the rest of the money-making world. The very last passenger train is ceremoniously leaving town. All the great and the good, including the widow of the former governor, gather at the depot to ride the last train or to wave it adieu. Festively marking their world's death seems strange, doesn't it? But there was a time that the major civic events of most towns' lives were marked in similar fashion. It's certainly gone out of style now. It's hokey, it's corny, but it was also a way to experience community. Certainly not something we do much of here in the 21st century. Like passenger trains, it's something that seems worth reviving.

The Rope Swing Ah, adolescence! That horrible, awkward, miserable time when your body and mind stop making sense even to you! Add being queer and living in a dinky little burg with people you've known your whole life and, well, what could possibly go right? I think all Adult Survivors of Childhood can relate to the misery of knowing (sort of) what you want (but are terrified) to say to your crush object:


He's afraid that he'll cower into himself again like every other day, and then say nothing at all when he really wants to say everything--to speak his body and his heart into existence.

And the poor lad in this story has a crush object who is quite clear about what he wants, leading the two of them out onto the rope swing that ends hesitation and compels action. The story ends there, in that magic, liminal space of having made the jump but not the landing.

Pauly's Girl For me, the second-most relatable story in the collection. The weird grief-space of the intimate, platonic partner of a dead "friend" isn't in any way acknowledged by existing support systems. A dear and valued woman-friend of mine, whom I'd known for 26 years, died suddenly. I was distraught, and those around me at that time looked at me as though I was a head case for being upset that someone I'd spoken to daily, someone I'd traveled tens of thousands of miles with, was missing from my world. It is an amputation, and others don't spare that relationship's specialness a moment's thought. Pauly's girl can't quite figure out what to do, think, or feel, since she's always had Pauly around to lead. The story ends hopefully, though:


She walked down the lawn and surveyed the world as they'd both seen it--the wild limbs of the leaning apple tree, the golden-brown evening sky, the black silhouettes of the mountains. The trunk and the branches of the tree had bent over the years, under the weight of the heavy fruit. One of the biggest branches had grown down from the canopy of the leaves, all the way to the ground and straight along the grass...the end of that same branch had begun growing up again, at a right angle, the wood bending toward the sky.

Through the Still Hours is a painful reminder of a tale that no matter what, with the best of intentions, relationships change and not always for the better. A male couple, living in the midst of all the people they've always known, celebrate their fourth anniversary in a sexless, silent struggle to come to grips with their basic incompatibility. Who knows when it began to eat at one or both of them, who cares why, now is the moment the problem comes to a head like a boil. Their oblivious friends, the supposed celebratory dance outing, none of it is distracting enough. Over is painful, but real.

Felicitations is the least interesting story to me, perhaps because the world of the wealthy West Virginians is the setting. I've been around those people most of my life, and they are boring to me. The doctor sexing up another doctor story does nothing for me, either. As to the stakes set into the story, well...seems to me she is cold and selfish and he is a wussy, and that's without interest to me, too. YMMV, of course.

Corporeal sets a misfit adolescent girl on a search for her father. Her mother's a class-A head case, her father lives on the wrong side of the tracks in a place that at best is somewhere most of us would consider the wrong side of the tracks. She speaks to her father's neighbor, an older man finishing out his allotted span in squalor and drunkenness. It's sort of exciting for an adolescent to relate to an adult one-to-one. As such things often do, however, her social time with the old man ends with his grappling with her, kissing her. And then from wherever his decency sank some bubbled up and he throws the child out. As she leaves to slink quietly home, she comes to a decision:


She was not sure if she knew her father, or even if she wanted to anymore. She wanted to go home into her bed and hide under the covers. She took her father's key from her key ring. She left it carefully on the doorstep and ran through the quiet night toward home.

Hank the King follows a colossal loser through his daily routine, until one too many screaming matches with his wife send him off to gamble and drink his empty, loveless day away. He finally gives up his last masculinity-defining object, a prized gun, and returns to his loveless home, gives his wife $1000, and goes on a bender. Wonderfully enough he loses all his stake money, all his winnings, and none of his despair. Happy ending? How would that even look to a man in Hank's kind of life? And so I say it's wonderful because Corcoran doesn't pretty it up or grubby it down. It's real, it's true. Trust him. Trust Hank, too.

Excavation takes a pair of teens into the forbidden precincts of a condemned and collapsing school, relic of the town's palmier days as a transportation hub for the Appalachian treasure being stripped out...wait, different topic...so these two kids, scared of the dark, musty, and truly dangerous building, go searching for something, anything interesting to take out and prove they were there. When a fire starts by means unknown, they're trapped until they put their heads together and escape through a double-boarded window. Running away, they discuss in a swivet the fear of being blamed for the fire. In the end, holding hands, the fire consumes the superfluous grandeur of the school and cements this young pair into a couple.

Brooklyn, 4 a.m. is a tender love letter to a long-term partner. It is short and it is complete and it is full of joy.

A Touch upset me quite a lot, as it focuses the attention of an older, neurotic mess of a man on a young survivor of a horrific hate crime. The nature of the crime brings me to the edge of screaming, but I will leave it for you to discover. The older man's response, a repelled fascination that his drinking buddy encourages him to leave by not being so obvious..."leave the poor man alone"...ends with a close approximation of stalking, yet another point of anger for me. So while I can't say I enjoyed this story, I can attest to the honesty and effectiveness of the writing: I was a trembling, nauseated wreck when I finished it.

My take on Jonathan Corcoran is that we'll hear more from him, and it will be good and get better. Start here with this collection, say you knew his writing when.
Posted by Richard at 6:30 AM