THE SUNSET GANG, old age ain't for sissies but it can be played for laughs 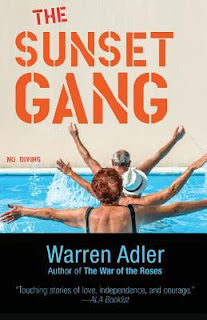 The Publisher Says: In America, where "old" is a dirty word, people over sixty-five are often shut out as if growing old were some kind of contagious disease. But you cannot shut the Sunset Gang out of your heart.

With time running short, these intrepid residents of Sunset Village in Florida continue to thirst for life and love.

"The Sunset Gang" is as lively, fun, and courageous a group as you'll find anywhere this side of the Last Reward. The fact that you'll find them at Sunset Village, a condominium retirement community in Florida - where an ambulance siren is the theme song and cycling at a stately pace is strenuous exercise - does not mean that they are ready to pack it all in. Not by a long shot.

If you were to walk down one of its well-tended paths, you might spot Jenny and Bill sitting on a bench, acting like young lovers, and never suspect that they are married - to other people! And at the pool, Max Bernstein, with an expertise that comes from five decades of skirt chasing, is singling out attractive widows.

But the true beating heart of Sunset Village is the love of family and friends. Widowed Molly Berkowitz learns that although her son and daughter may be failures in the eyes of the world, they are well worth bragging about, and Isaac Kramer begins to feel truly at home when the gray-haired boys down at the Laundromat start calling him by his old neighborhood nickname, "Itch."

My Review: Waitaminnit waitaminnit whereinahell's the Bryce Method, you ask...I hear you, don't front! I'll tell you the truth: much as I say "blahblah isn't a novel, it's a récit or braided stories or a syncretism of Egyptian death-spells with upanishads or whatever," I am equally likely to say this is a novel when told it's stories.

Just that the chapters are a funny length.

For funny old Jewish people, that shouldn't be a problem. And honestly it isn't. This is a comfort read. I got lots and lots of laughs, and as I live in a building full of old Jewish folk, I was frequently trying not to read chunks of it aloud to...no one in particular (it says here). The late Warren Adler knew exactly what he was doing writing this entertaining chronicle of aging and its indignities hidden behind a very slippery figleaf. Laughing at people is frowned on, rightly so, in today's world. But laughing at yourself, and with your friends, is the way to stay sane in a world that won't listen to you, doesn't much want you, but still has your heart walking around in it.

That's everyone in here. While the author first published it in 1977, when a lot of the world's prejudices were different, the list of concerns of the Greatest-Generation cast of Jewish folks sounds exactly the way my neighbors sound. It's a little odd, when I think about it, that the immigrants raised in the 1930s on the Lower East Side and Brownsville who mostly populate the book are darn near clones of the Long Island facility I occupy. But I think it shows cultural continuity is very much a feature of Jewish identity. I know several of my friends here are children of Auschwitz and other camp survivors...only recently, early in COVID, did our last survivor resident die. (Vale Arthur, quit nagging Yhwh about what she needs to do better.)

Oh, okay. I can't resist the power of Tradition in this context. Bryce, your method lives!

Yiddish revs up the ol' libido when two assimilated folk reconnect with their mother tongue.

Itch reminds of the moment in Cranford when Judi Dench, as Miss Mattie, mourns her sister's death with the unbearably poignant musing, "Now there is no one left who will call me Matilda." A name is an identity, and as it disappears, one grows lonely for it and for what it stood for in one's life.

An Unexpected Visit reminds us all that there's a steady beat of time passing, and with its passing it's taking away forever the means of getting inside someone's head.

God Made Me That Way, and pausing in one's day to thank her for it is a good idea since it means the right one will indeed come along.

The Braggart proves that empty gourds make the most noise.

The Demonstration limns the timelessness of battling hatred in her den.

The Angel of Mercy feels "The End" coming up over the horizon, and...it's okay.

Poor Herman proves that no matter how long true, spirit-deep friends are separated, they're really still the same friends.

The Home is a fate worse than death. It is...The End...but the curtain stays up. *shudder* Sooner I would die, thank you please.