NO GODS, NO MONSTERS, first in a series, author's second novel, lauded and loved and awarded 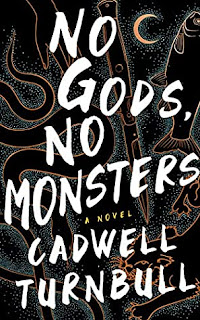 Rating: 4* of five, all for the slow-burn realization of the identity of the true main character

The Publisher Says: One October morning, Laina gets the news that her brother was shot and killed by Boston cops. But what looks like a case of police brutality soon reveals something much stranger. Monsters are real. And they want everyone to know it.

As creatures from myth and legend come out of the shadows, seeking safety through visibility, their emergence sets off a chain of seemingly unrelated events. Members of a local werewolf pack are threatened into silence. A professor follows a missing friend’s trail of bread crumbs to a mysterious secret society. And a young boy with unique abilities seeks refuge in a pro-monster organization with secrets of its own. Meanwhile, more people start disappearing, suicides and hate crimes increase, and protests erupt globally, both for and against the monsters.

At the center is a mystery no one thinks to ask: Why now? What has frightened the monsters out of the dark?

The world will soon find out.

I GOT THIS BOOK FREE WITH KINDLE CREDITS. SHOP OFTEN! THE REWARDS ARE REAL. (/irony)

My Review: I think the worst part of reading this book was realizing that the monsters, the not-villainous villains of the piece, are me, my friends, my lover, all of us Othered by...so many factors.


“I’m sorry to do it this way, but I had to be safe,” Melku explains. “I won’t waste any more time. Our collective’s mission is to support the solidarity movement. Often, that has meant supporting marginalized peoples. Some of you are part of the queer and trans community, like me. Many of the most valuable monsters are also a part of these communities, which is why redefining to include them is so important. In that spirit, I think we should extend our support to monsters since it is likely that they’re already in the movement but have chosen to remain silent.”

A political meeting of anarchists in a collective...votes to include literal monsters...the kind that actually DO eat people...in its aims. This book...its imagination shames me.

I've never, ever once thought, "well, civil rights for werewolves should absolutely be guaranteed."

What is left for me to learn over the remainder of my life never, ever stops expanding. ...Yay...? And before anyone says it, no there are not actually werewolves or any other creatures we call monsters, but there are a LOT of humans I'd unhesitatingly call monsters all over the country where I live. All over the only planet we know of that has life on it. So there's clearly no god, either, because if so they're either weak or malevolent since they can't or won't fix things they broke. The book's title, then, snaps into focus: "NO GODS, NO MASTERS," the anarchist chant goes; now that "monsters" are real and have come out of their socially imposed hiding, it needs refreshing: "NO GODS, NO MONSTERS," or a simple acknowledgment that we are all on this lifeboat in the middle of a deadly environment and had all better get busy saving owrselves and each other from paying the ultimate price. No one above means no one below. And that, somehow, is terrible, bad, threatening...why, exactly? Because monsters are Evil? Because, if no one is In Control, things will be...worse? ("For whom" is left unstated. Obviously things will be worse for the ones who benefit from the way they are now.)

But the truth is, it never turns out that way. Marriage equality didn't turn Society into limp-wristed men in feather boas, or women in plaid shirts and bad haircuts. It resulted in a revolting boom in the wedding industrial complex. A lot of bigots making noise about being asked to bake cakes for people they didn't like much. COVID kills us all (in the USA, a million in two years which is more than the 698,000-plus AIDS has killed in 42), and capitalism couldn't care less about who's zoomin' who as long as the survivors consume consume consume.

The principal problem for me is the story's diffusion of narrative drive among so many characters. I do understand this fits the anarchist genesis of the story. But it plays into a problem that trumps political concerns: How am I supposed to sustain momentum in the read? I was able to make my way through the book but it took me longer than it usually does to finish it...almost a month. For fewer than three hundred pages.

I overcame that issue by remembering this phrase that I've entered into my commonplace book:


As he walks with the crowd, he understands what he had forgotten: that a march is not just a voice against violence and trauma, but also a reminder that even in a cause that is stacked against them, no one is alone.

Remember the Tiananmen Tank Guy? He is the reason governments work so hard to suppress free media; he is the reason many of us bother to protest in whatever ways we can. He stood alone, but crowds of protestors aren't when he appears in our minds' eyes. This is also why crowds become mobs, and why protest is something that deeply disturbs the Powers That Be.

When cops kill innocent people nowadays, we as a society are almost sure there will be protests. But now there is a complicating factor of monsters, creatures we're afraid of and whose means of making a living is violent by their very nature; they are, by the definitions we've all come to understand and possibly even accept, but certainly internalize, unnatural:

“No monsters,” the crowd chants back.

Simon-pure anarchist speak. Like being in a steering committee meeting for any politics at the local level organization. It is, in other words, bedrock truth that this story rests on. It is this meticulous inclusiveness by dint of hard-fought local battles that gives me little moments of happy recognition and pleasurable fellow feeling, of not being alone as I face a hostile-to-me world.

Go with Author Turnbull on the hunt for the truth of Power through these many points of view. Power resisted, power obtained, power flouted and abused...there is all the power any one being or group can ever use in the simplest truth of them all: Mystery exerts power in ways nothing else can hope to equal, still less surpass.
Posted by Richard at 5:38 AM