RACISM, NOT RACE: Answers to Frequently Asked Questions & THE INCREDIBLE UNLIKELINESS OF BEING: Evolution and the Making of Us 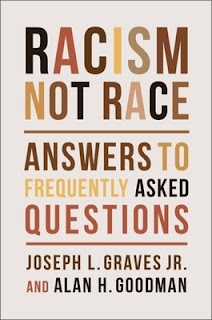 The Publisher Says: The science on race is clear. Common categories like "Black," "white," and "Asian" do not represent genetic differences among groups. But if race is a pernicious fiction according to natural science, it is all too significant in the day-to-day lives of racialized people across the globe. Inequities in health, wealth, and an array of other life outcomes cannot be explained without referring to "race"--but their true source is racism. What do we need to know about the pseudoscience of race in order to fight racism and fulfill human potential?

In this book, two distinguished scientists tackle common misconceptions about race, human biology, and racism. Using an accessible question-and-answer format, Joseph L. Graves Jr. and Alan H. Goodman explain the differences between social and biological notions of race. Although there are many meaningful human genetic variations, they do not map onto socially constructed racial categories. Drawing on evidence from both natural and social science, Graves and Goodman dismantle the malignant myth of gene-based racial difference. They demonstrate that the ideology of racism created races and show why the inequalities ascribed to race are in fact caused by racism.

Graves and Goodman provide persuasive and timely answers to key questions about race and racism for a moment when people of all backgrounds are striving for social justice. Racism, Not Race shows readers why antiracist principles are both just and backed by sound science.

My Review: Author Graves is a biologist; Author Goodman is a biological anthropologist. These are scientists answering a series of questions that have, for over a century, pretended to be scientific excuses for the hate-based ideology of racism.

There is one race: Human. Homo sapiens is the genus and species of each and every one of us.

The format of this book is supremely simple. Its chapters, titled eg "Everything You Wanted to Know About Genetics and Race" and "Intelligence, Brains, and Behaviors" (bonus points for not forcing me to retrofit the series/Oxford comma, gents!), are organized around questions, eg "What do geneticists mean by the structure of human variation?" and "In the twentieth century, were Jews, Italians, and Irish thought to be separate races?" and "When doctors, epidemiologists, and other medical scientists say that race is a risk factor, what do they mean?" There is, at the very front of the Kindle book, a hyperlinked list of all the questions raised in this book. It could not be easier to use if it was an audiobook that read itself to you.

The Notes section, which (I realize and suspect the authors do, too) you aren't all that likely to read, is more than a simple list of people and projects cited; the authors also provide some editorial comments worth your time to follow the hyperlinks to see. There are quite a lot of them, but there's such a thing as telling too much (in fiction, called "spoilering" and apparently a thing I do a lot despite trying to think like a spoilerphobe).

I'll conclude with a ringing endorsement of this exercise in calm, logic- and fact-based debunking of enduring hate-based myths. The authors said it best of all:


Antiracism starts with understanding what race is and isn't. Antiracism is not just an ethical and scientifically correct position; it is necessary for our survival. 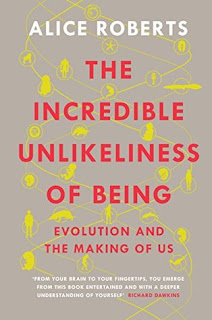 THE INCREDIBLE UNLIKELINESS OF BEING: Evolution and the Making of Us
ALICE ROBERTS
Heron Books
$5.99 Kindle edition, available now

The Publisher Says: The presenter of the BBC's The Incredible Human Journey gives us a new and highly accessible look at our own bodies, allowing us to understand how we develop as an embryo, from a single egg into a complex body, and how our embryos contain echoes of our evolutionary past.

Bringing together the latest scientific discoveries, Professor Alice Roberts illustrates that evolution has made something which is far from perfect. Our bodies are a quirky mix of new and old, with strokes of genius alongside glitches and imperfections which are all inherited from distant ancestors. Our development and evolutionary past explains why, as embryos, we have what look like gills, and as adults we suffer from back pain.

This is a tale of discovery, not only exploring why and how we have developed as we have, but also looking at the history of our anatomical understanding. It combines the remarkable skills and qualifications Alice Roberts has as a doctor, anatomist, osteoarchaeologist and writer. Above all, she has a rare ability to make science accessible, relevant and interesting to mainstream audiences and readers.

My Review: A narrative approach to a complex scientific study that's occupied Humanity for millennia is going to fall short in both rigor and scope. In that sense, Dr Roberts was doomed from the outset. What anyone who undertakes such an enterprise anyway chooses, then, is to fail in a particular way. In the case of Dr Roberts, an actual, practicing scientist, the choice was obvious: rigor, begone therefore to allow me the scope to speak directly to the audience for this book.

I'm quoting this bit from the chapter entitled "RIBS, LUNGS, AND HEARTS":


When I look at an archaeological skeleton, the first thing I do is lay out the bones in an anatomical arrangement, as though the individual were laying on {their} back, arms by the sides, palm uppermost. Then I make an inventory of the bones, before moving on to look at each bone more carefully, taking note of features that might help me to determine the age and sex of the individual, as well as any telltale signs of disease.

Ribs can be a real pain—they're often broken into short fragments—but after some patient work on this jigsaw puzzle, it's possible to put them in order. A human chest is shaped like a barrel that has been squashed front to back, and the shape of the individual ribs reflects their position.

Careful, clear, and just a bit humorous...you got the "pain" play on words, right?...but the next sections are peppered with "rectus abdominis muscles" and a list of hominin names like Homo rudolfiensis and Homo habilis and we're way out of most people's comfort zone. This explains, I hope, my mingy-seeming rating.

What this book is doing, that is presenting the astounding evolutionary development of the Homo sapiens writing and reading this review, is very valuable. In and of itself, the existence of this project is heartening and necessary. There is an audience for science stuff that wants to know a lot of the material in here. But there aren't that many of us. Dumbing down, as any scientist wishing to communicate with laypersons absolutely must do, is a process of selection and elision. Author Roberts (I typoed "Riberts" and thought long and hard about just leaving it to see if anyone noticed) chose well, for me at my level of interest and information. But what about everyone else?

Choices, in any event, were made and they were illustrated with interestingly detailed line drawings and they were developed to a deeper level than I would've advised she take them; but Professor Doctor Author Roberts is a skilled communicator and (if one is willing to put in the work) will reveal to her readers an astoundingly inspiring story of unlikely events that came up with the form and function of the Homo sapiens she wrote this fascinating, but dense, book to inform and educate.