ALONE ON THE MOON: A Soviet Lunar Odyssey, alternate history of the Space Race! 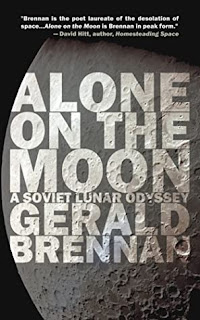 The Publisher Says: May, 1970. A two-person Soviet crew approaches the moon, ready to accomplish the greatest feat in human history—provided they can overcome their own petty jealousies, and the unforgiving harshness of space.

Alone on the Moon chronicles a Soviet moon mission through the eyes of Boris Volynov, a backup who’s been pressed into service helping Alexei Leonov (a man he despises) attempt humanity’s first lunar landing. Thoroughly researched, it’s a detailed and plausible rendition of two larger-than-life personalities facing incredible challenges. It’s also a meditation on luck, trust, the nature of observation, and the burden of being chosen—plus the way our personal narratives can shape (or poison) our perceptions of the present. Do the stories we tell ourselves shape our fate, or can we write a new chapter? The answer awaits.

The titles in the Altered Space series are wholly separate narratives, but all deal with the mysteries of space and time, progress and circularity. Each one is an ensō of words in which orbits of spacecraft, moons, planets, and people allow us fresh perspectives on the cycles of our own lives.

My Review: Remember Mary Robinette Kowal's Lady Astronaut of Mars series? Alternate space race with hugely accelerated stakes, a lot of international and interspecies cooperation? Like, even women going to the stars?!? Well, that tore it. I had to have more space-but-not-this-way stories.

So here I am reviewing the next most different take on the Space Race...a Soviet first-lunar-landing story! And I hated it!

More precisely, I hated the narrator: Bitter Boris the Bore. Banging on about how unlucky he is, how a Jew is always held back, how deeply he hates Alexei the Golden Boy...his nickname's fuckin' BLONDIE facryinoutloud!...and his tedious wife, the chilly withholding climber.

I'll never read this book again. But goddam what a story! What a sheer, pulse-pounding rocket ride of a story!

The whole burden of the refrain "unlucky" is simple: Don't be different. Don't stand out. Be there but never be noticeably better than anyone in power unless you're so good there's not a corner that they can sweep you into. Because they will. In other words, big organizations are all alike and whatever alphabet the nameplate's are printed in the behaviors are the same.

What happens to Boris is utterly terrifying. At every turn, his shot is blocked. His spot is taken. When he gets to do anything,it goes wrong. Not just people, then, but gawd hates him. And it's no wonder they do, he never met a joy he couldn't squelch or a happiness he couldn't chill to absolute zero. Even his son is being raised by this dark, unhappy cloud of a belief that nothing goes right because it's inevitable.

What this does for Blondie, the first man on the moon, is give him a partner in space who believes it's all going to shit anyway but he's going to check, recheck, then check the recheck so no one can say it was his fault. He calculates things Control has already fed into his computer. He's always got a finger on the cut-off switch so he can make the computers and the thrusters and the machinery of every sort obey his calculations. Which are, of course, correct. Blondie's always been the fair-haired boy and the lucky one so he's just indifferent to the details.

And do you know what? He should't've been *quite* so sanguine. I delight in that bit. I thrilled to the ways the inevitable problems that crop up got handled, solved, and Boris vindicated. There's a reveal at the end of the book that wasn't a surprise to me, there's a lot of technical stuff that will likely put off a casual reader, and there's the basic problem of feeling whined at for almost 300pp. But there was no damned way I was closing this book until I was sure the story ended...well.

And that's why it gets four whole stars.