FREE: Two Years, Six Lives, and the Long Journey Home does not exaggerate or overstate its course 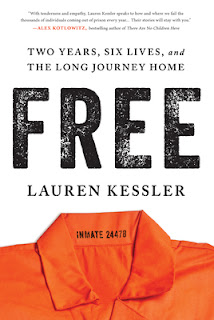 The Publisher Says: 95 percent of the millions of American men and women who go to prison eventually get out. What happens to them?

There's Arnoldo, who came of age inside a maximum security penitentiary, now free after nineteen years. Trevor and Catherine, who spent half of their young lives behind bars for terrible crimes committed when they were kids. Dave, inside the walls for 34 years, now about to reenter an unrecognizable world. Vicki, a five-time loser who had cycled in and out of prison for more than a third of her life. They are simultaneously joyful and overwhelmed at the prospect of freedom. Anxious, confused, sometimes terrified, and often ill-prepared to face the challenges of the free world, all are intent on reclaiming and remaking their lives.

What is the road they must travel from caged to free? How do they navigate their way home?

A gripping and empathetic work of immersion reportage, Free reveals what awaits them and the hundreds of thousands of others who are released from prison every year: the first rush of freedom followed quickly by institutionalized obstacles and logistical roadblocks, grinding bureaucracies, lack of resources, societal stigmas and damning self-perceptions, the sometimes overwhelming psychological challenges. Veteran reporter Lauren Kessler, both clear-eyed and compassionate, follows six people whose diverse stories paint an intimate portrait of struggle, persistence, and resilience.

The truth—the many truths—about life after lockup is more interesting, more nuanced, and both more troubling and more deeply triumphant than we know.

My Review: I'm the sort of bleeding-heart liberal who wrote to prisoners in for long stretches back when my hands could still write. I had one guy parole to my address. He was one of the luckier ones...his dad's car was his, he had a nest egg from dad's death, and he made it okay through re-entry. (Explaining ATMs was the mind-blowing moment of complete freak-out for him...a few years later it was the cellphone that utterly destroyed his brain.) But he was very, very lucky and knew it.

Many more aren't. We, as a society, have made our laws such that anyone who went to prison was effectively unemployable and unusable after that. Now, having read my reviews of How Fascism Works and Racism, Not Race, do some threads come together in your privileged mind?

Not one iota of this is accidental. It is designed carefully to have the effects it does. And on whom it does. You who vote for GOP candidates are disproportionately to blame for this tragic, wasteful, and hideously costly disaster that unfolds out of sight. "Law and order" is second only to "horrified and heartbroken" in the right-wing litany of useless at best, and harmful at worst, mealy-mouthing.

What Author Kessler has done with her trademark facility is immerse herself into situations hitherto privately endured, suffered through, floundered deeper into. It's her gift. From the ridiculous (Raising the Barre: Big Dreams, False Starts, & My Midlife Quest to Dance The Nutcracker, 2015) to poignant (Dancing with Rose: Finding Life in the Land of Alzheimer's, 2007) to flat-out hilarious (My Teenage Werewolf: A Mother, a Daughter, a Journey Through the Thicket of Adolescence, 2010), she's been in the thick of stuff lots of us endure without guidance, and brought back either—or more often both—wisdom or insight. She does it again here, with the afterlife of prisoners as "free" people. I know you're shocked.

A big part of what led Author Kessler to this topic was her frequent writing classes taught to incarcerated people. It's a shocking, unfathomable truth that teaching people to reach into themselves and bring out stories...their own or made-up ones...is a giant benefit to them! Imagine such a thing! And now imagine how comparatively few prisons offer such a simple, inexpensive thing....

I digress. So Author Kessler knew firsthand what was going to happen before she decided to do her party trick and get into the nitty-gritty. When she does that, she brings the reader a volume of emotional reality that is hard to endure, but impossible to ignore. There are statistics. There is research and its concomitant eye-smartingly dull prose (that missing half-star making sense now?). But mostly, there's Arnoldo and Vicki and Leah and Sterling...there's a solid undertone in even the least scintillating passages that ties it to a person whose real life this is, and thus made this reader care deeply.

It's hard to reach in and grab one's tiny remaining blossom of empathy to pluck and give to troubled, law-breaking people. And that's why I keep trying. I don't want to, but I also don't want to live in that world. The one that has room only for Me and Those Like Me. Because that world's never done a good turn for this particular reader and writer, has conditionally accepted what I offered only to eject me from its benefits when I wasn't able to keep giving.

I'm hugely lucky, compared to the folks who're leaving prison. I have a lifeline they lack: The System works for old white men like me because it's meant to work for us. So I do this. I read their stories, I tell you about that reading, and say "you should read this, it's important that you know what's happening in your name."