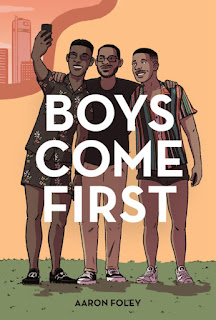 The Publisher Says: Suddenly jobless and single after a devastating layoff and a breakup with his cheating ex, advertising copywriter Dominick Gibson flees his life in Hell's Kitchen to try and get back on track in his hometown of Detroit. He’s got one objective — exit the shallow dating pool ASAP and get married by thirty-five—and the deadline’s approaching fast.

Meanwhile, Dom's best friend, Troy Clements, an idealistic teacher who never left Michigan, finds himself at odds with all the men in his life: a troubled boyfriend he's desperate to hold onto, a perpetually dissatisfied father, and his other friend, Remy Patton. Remy, a rags-to-riches real estate agent known as “Mr. Detroit,” has his own problems—namely choosing between making it work with a long-distance lover or settling for a local Mr. Right Now who’s not quite Mr. Right. And when a high-stakes real estate deal threatens to blow up his friendship with Troy, the three men have to figure out how to navigate the pitfalls of friendship and a city that seems to be changing overnight.

Full of unforgettable characters, Boys Come First is about the trials and tribulations of real friendship, but also about the highlights and hiccups—late nights at the wine bar, awkward Grindr hookups, workplace microaggressions, situationships, frenemies, family drama, and of course, the group chat—that define Black, gay, millennial life in today’s Detroit.

My Review: There's no such thing as "reverse racism." There's just racism, with shifting targets. Dom, Troy, and Remy all say, and feel, really racist things. And guess what: Unlike white people, these Black men have reasons to feel angry and frustrated and dispossessed. Their skin color marks them out as targets for lunatic racist white scum.

And guess what else? Black folks ain't perfect. These are three gay men, in a social milieu that really, really does NOT want their men to be gay. At all. So can you see what leads these loving, flawed, hurting, sadder-looking-for-wiser guys to be mouthy? It's like women of all colors rolling their eyes so hard they see their brains when men of any color start legislating what they can and can't do with their own bodies. There's a lot of anger built up at a lot of groups. Most with reason and justice on their side.

A lot of that anger is faced up to in this story of hurt, betrayal, and abuse. Dom and Troy, in their different ways, are reeling from domestic drama that is instantly relatable. Remy, not part of the kidhood bond shared by Dom and Troy, is probably the most personally insulated from domestic drama since he's in a "situationship," a neologism (it was to me, at least) I really like for a long-distance, still love-based, relationship. Not like I understand that from the inside or anything....

Remy's job as a real-estate hustler leads to a major fracture in his friendship with Troy and, to an extent, Dom, because his work is threatening to repurpose Troy's employer, a school, into gentrification's profitable arms. Detroit's decades of economic woes are a huge part of this story's rage-fuel. Would Dom have left Detroit for New York (and by extension met his cheating ex) had Detroit been capable of sustaining his ambitious need for a media market commensurate? Troy's domestic woes are fed, at least in part, by the economic struggles inherent in pursuing a teaching career. And here's Remy about to make a bundle of cash off the city's redevelopment....

I think the major take-away from this story is that there's no room for racism's corrosive effects in any society we need to support the creation of; and the other hate-isms, like homophobia and colorism, have to go in the dumpster too. When these Black, gay men face so much trouble from outside, it makes their work to fix the problems inside so very much harder. And that stops them not at all, doesn't even slow them down much, as they fight and fuck and work themselves up to fever pitch. These men, messy lives and sad hearts and powerful spirits in them all, make every day count. They don't, by the end of the story, waste what they've got anymre in wanting what they can't have.

But that does not mean they take second best. Not for long, anyway. It makes them great companions for a summer laze on the beach.

Just...maybe skip ahead over the smexytimes. Until you get home, anyway.