EVEN GREATER MISTAKES: Stories, Charlie Jane Anders does the "doesn't get better than this" victory lap 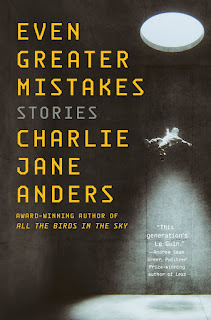 A wildly popular slapstick filmmaker is drawn, against his better judgment, into working with a fascist militia, against a background of social collapse.

Two friends must embark on an Epic Quest To Capture The Weapon That Threatens The Galaxy, or else they’ll never achieve their dream of opening a restaurant.

The stories in this collection, by their very outrageousness, achieve a heightened realism unlike any other. Anders once again proves she is one of the strongest voices in modern science fiction, the writer called by Andrew Sean Greer, “this generation’s Le Guin.”

My Review: This is a collection to dip into not slurp down greedily. I mean, where else do you find, "A whole book of short stories can be overwhelming, like imaginative speed dating." This isn't even in a story! It's in the opening act, the Introduction! She's not keepin' her powder dry, unlikely for a seasoned campaigner who's founded geeky websites; or she's just got that immense an arsenal and knows she doesn't need to pace herself.

The best thing I can say of this epitome of Author Charlie Jane Anders's career is that you are unlikely to become bored. A story about time travel that includes, as I've never seen any other place, the fact that the Earth is moving in space; the Sun is moving in space; and not one bit of that enables a careless time-traveler to land where they began. Another story about time travel, but for an extremely specific time, and how that affects a love affair. Love, in every guise you can imagine, underpins every story. Love unspoken, love requited, love rejected...love all over the shop. Seriously. Get some towels.

You'll note that I'm using the venerable tool called the Bryce Method to bring you the flavor of the tales.

As Good As New elicits one of Author Anders's fun personal revelations in its intro...LeVar Burton read this story aloud! I can see why...it's a deceptively simple story about a deceptively simple solution to world peace placed in the executive power of a decidedly not simple heroine. One who does not hesitate to think and plot and carefully consider where others have already gone wrong. A writer, in other words, who loves the craft more than the plaudits.


Marisol had...gone back to the pre-med books, staring at the exposed musculature and blood vessels as if they were costume designs for a skeleton theatre troupe.
–and–
Maybe she would have done more good as a playwright than a doctor, after all—clichés were like plaque in the arteries of the imagination, they clogged our sense of what was possible. Maybe if enough people had worked to demolish clichés, the world wouldn't have ended.

Rat Catcher's Yellows runs the reader smack into the wall of early-life dementia. A mutated virus does it in her story—cytomegalovirus did it in mine. It was so awful reliving those dark, hopeless almost-the-end days thirty years gone that this is where I stopped reading the book my first trip through.


...Shary is forming relationships with these cats in their puffy-sleeve court outfits and lacy ruffs. In the real world, she can't remember where she lives, what year it is, who the president is, or how long she and I have been married.

But Shary wanted me back, and kept nudging me to man up and finish her life with her...because it really was, like my man's ending, a beginning for something new. 4.5 stars

If You Take My Meaning is, per Author Anders's explanatory note, a giant ball of spoilers for The City in the Middle of the Night, which I haven't read yet, so this is me skippity-skip-skipping to the next read! I'm sure I can swing back around to it after I've done the necessary reading.

The Time Travel Club confirms what I've always believed: the only way anything at all ever gets done is the desperation of belonging, of making one's own space in a crowded, empty cosmos, meeting social isolation in a group of one's fellows. It lifted my sadness into a higher orbit to read Lydia's group's happiness-building involvement in a fantasy world that barely approached reality until it became reality. Plus now I know the word "fauxropean" really exists. My joy is unbridled. 4.5 stars

Six Months, Three Days got an entire review to itself in 2013. Go look.

Love Might Be Too Strong a Word has such a great backstory...maybe threatening the story itself for pre-eminence in my heart. And getting a seven-fingered hand on your four-fingered knuckles does a completely scary number on my head.

Until, of course, the true alienness...the multimorphic species with complex reproductive anatomies and even more baroque sexual ethics...hit me. And the pronouns...! Gadzooks! The pronouns make "they/she/he" a doddle! The beautiful weirdness of the alien city, its voyage across space, the fanciful glories of forbidden romance between...castes? morphs?...in defiance of carefully engineered plans, then the Big Reveal gives the intended perspective and, well.... 5 stars

Fairy Werewolf vs Vampire Zombie brings one into range of one w-bomb and what I'd have to call a w-grenade. (Mostly because it makes sense in context to drop the w...but it's still That Unnatural Ocular Act.) Zombies, Fae, vampires, werefolk...all real. And all ready for a drink at the bar where the wolf-bit Faerie princess chooses the most creepy of Cabaret's creepy numbers, "Don't Tell Mama", to settle a magical duel. A magical karaoke duel. There's also brains for a hungry zombie, in a lovely balsamic vinaigrette. That's the kind of world we're in when Author Charlie Jane is at the helm. We're in Weirdsville, sure, but that does not mean we can't have nice things. 4 stars

Ghost Champagne is the weirdest story yet...a comedian with a seriously fucked-up life (not narrowing that down much, am I?) has a strange variation on Cotard's syndrome that helps (?) her cope with crippling depression. Her Evangelical mother's midlife crisis is recognizing she's a lesbian and marrying a woman her daughter's age. And that's where the normal part ends. While Cotard's gets its act together, she's got her groove as a drunken vomiting ghost whose body's now inhabited by the ghost that's been haunting her. Who happens to be the woman who's being haunted, only older. And dead. 4 stars

My Breath is a Rudder is as plain as the nose on your face: Getting older in a city full of Peter Pans is a bear. Not one soul knows or cares about the city you fell in love with and there's no one left to be yourself with. You're as creative as you ever were but that's now the fantasy you're creating for sale. Wonder why no one's biting....

San Francisco, land of my birth, holds little appeal for me. This story brilliantly encapsulates why: Even in the near future, the city believes its own hype. 3 stars

Power Couple has my very favorite Charlie Jane line of all time in it:


Much later, I discovered that his butt fit perfectly inside my cupped hands, the curve of his undercheek resting just right against my crinkled life lines, as if copping a feel was the whole reason I had palms in the first place.

Too much? Not enough! And then there's the story itself, how the World is not designed for people which is deliberate since people designed the World...so why isn't it better?

Because somebody likes the way it is, and that somebody ain't interested in what works for you. Which is why kludges seem like good ideas. 4 stars

Rock Manning Goes for Broke is the longest piece in the book, the revenant of a novel from the early 1990s that had story-stuff in it that was not about to let the eyelashes of its creator go...you'll see why, or possibly have seen why if you've read it in some anthology from the past. I understand...there's a lot in here...but I did not enjoy the violence. It starts from Rock getting slung off the roof by his daddy in the first paragraph. I get the joke...violence ramped up isn't violence anymore, it's a joke...but I'm past the point of my life where I think that joke's funny. In fact, I'm a little bit embarrassed I used to think it was. 3 stars

Because Change Was the Ocean is what will really happen after The Apocalypse. People left will have babies, grandkids, whatever their hard work and their fates allow; these will be the natives of a new normal; they'll decide what to do, how to do it, what happens next, and you know what? San Francisco will still summon the misfits, the wannabes, and the loudly Othered to its sacred hills.


After a few days on Bernal, I stopped even noticing the other islands on our horizon, let alone paying attention to my friends on social media talking about all the fancy new restaurants Fairbanks was getting. I was constantly having these intense, heartfelt moments with people in the Wrong Headed crew.

It still, after decades and centuries, calls its own home to be weird together. 4 stars

Captain Roger in Heaven made me squirm as a monster grew before my eyes.


That was the thing {he} had left art school understanding: people make complicated pieces of art to explain human behavior, when the real explanation is almost always stupidity.

It is. And stupidity alone, among all that the Universe contains, has no beginning and no end...we surrender ourselves to it in order to make something, some lack or some surfeit, make ourselves whole with/out that. Like that can ever come from outside. 5 STARS

Clover builds on a dangling thread of All the Birds in the Sky which I've read...and liked...so I read this with a little shiver of anticipation.

Forgetting that it's about a c-a-t. My most beloathèd mammal next to Humanity. I finished it without feeling anything I think a cat-lover would except maybe relieved. But for different reasons. 3 stars all of which are grudgingly granted.

This is Why We Can't Have Nasty Things made me cry like a baby without his bottle. It's "I Love This Bar" only queer. And about an entire city. My Manhattan...the 70s, the 80s...gone forever. And I still love it. 5 stars

A Temporary Embarrassment in Spacetime is silly comedic space-opera joyfulness.


"See what I mean? I may have only one cell, but it's a brain cell!" He whooped and did an impromptu dance in his seat. "Like I said: you're the stealthy one, I'm the flashy one."

You are everything, Author Charlie Jane. You can give me more, and I wants it, preciousssss. 5 stars

Don't Press Charges and I Won't Sue is the nightmare/fever dream/body horror of what 45 and the clowncar of deplorables who rode his back to more power than they ever should've had want to do to Others. It's body horror, so be aware of that. It's also nauseating and claustrophobic and just when you thought it couldn't get worse, it does: Your ex-best friend, the one you had to leave behind with your deadname, is the one doing the awfulness to you. Because it's a job. Not rage, not revenge.

The Bookstore at the End of America proves that the best people on the planet are book people. Bar none. 5 stars

The Visitmothers is proof that, in the end, asking from the heart gets you nothing. Unless you're open to the newfangled idea that your happiness is achievable by making others happier and better and new all over again. Sweet, touching, and delightful. 4 stars