THE DOG STARS is beautifully written. Maybe too beautifully. It's a Very Writerly novel. 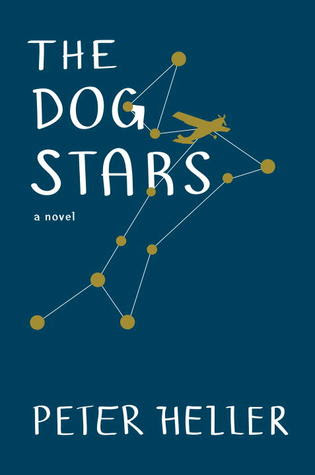 THIS COPY RECEIVED FROM NOT THE NEW YORK TIMES BOOK REVIEW as a giveaway...thanks y'all!

The Publisher Says: A riveting, powerful novel about a pilot living in a world filled with loss—and what he is willing to risk to rediscover, against all odds, connection, love, and grace.

Hig survived the flu that killed everyone he knows. His wife is gone, his friends are dead, he lives in the hangar of a small abandoned airport with his dog, his only neighbor a gun-toting misanthrope. In his 1956 Cessna, Hig flies the perimeter of the airfield or sneaks off to the mountains to fish and to pretend that things are the way they used to be. But when a random transmission somehow beams through his radio, the voice ignites a hope deep inside him that a better life—something like his old life—exists beyond the airport. Risking everything, he flies past his point of no return—not enough fuel to get him home—following the trail of the static-broken voice on the radio. But what he encounters and what he must face—in the people he meets, and in himself—is both better and worse than anything he could have hoped for.

Narrated by a man who is part warrior and part dreamer, a hunter with a great shot and a heart that refuses to harden, The Dog Stars is both savagely funny and achingly sad, a breathtaking story about what it means to be human.

My Review: I've tried and I've tried to think of a nice way to say that I don't like Iowa Writer's Workshop stuff because it's always Very Writerly. I was, as you see, unsuccessful. It's always full of good lines, it's always got charming or beautiful or moving imagery and characters with flaws and sometimes even dialogue with some zest.

But it's always Very Writerly. Thick and heavy and nutritious like spelt or brown rice. Sulphur molasses in gluten-free muffins. Serious and Good For You.

I hate that. Sorry, Mr. Heller, but that's you all over.

I like dystopias and post-apocalyptic stories, since I am the least chirpily optimistic person walking on Planet Earth. I want them to make sense, however, and not be rehashes of zombie munch-fests. This one makes sense. The pandemic that collapses the population? Totally buy that. The evil/vile behavior of the humans afterwards? Totally buy that. (Actually, from what I see, we haven't waited for an apocalypse to behave like scum to each other. But I digress.) The source of the dog Jasper's jerky treats? Brilliant, and also very frugal.

I like the story, too, up to the point where Hig, our pilot main character, flies off and Finds Himself. I know, I know, all characters must go through stuff and change as a result of it to make a novel really interesting. But the fact that Hig goes off'n gits him a woman is a little over the top. It's artificial feeling, like something inside Heller (or an editor outside Heller) said "there's no hope! give the poor bastard hope!"

It was, in my humble opinion, a wrong turn. The story up to then was an interesting, stream-of-consciousness exploration of an average joe who, inexplicably, survived the Apocalypse and kept on moving, breathing, numb from loss and scared, but real. And then, suddenly, he gets A Message and has to move move move to find the source! And he finds him a gal! Who knows, maybe that little impotence problem will clear up, they'll have a family....

That's not the same book I started reading, and I don't much like that book.

But in good conscience, I can't tell you it's a bad book. It's a pretty good book that could've been a really, really good book. It takes the subverbal vocalizations of its main character and puts them front-and-center, makes the style the point, makes the point the pleasure of reading. I just have this one little problem with the whole enterprise: It feels to me like it's been overthought, overwrought, and overworked. All down to that workshoppy aesthetic, and that happyendingitis that comes from thinking about the audience and not the story.

Well, so. Three and a half stars for the good, good phrases Mr. Heller has made and the promise of that first half. It will do.
Posted by Richard at 6:30 AM